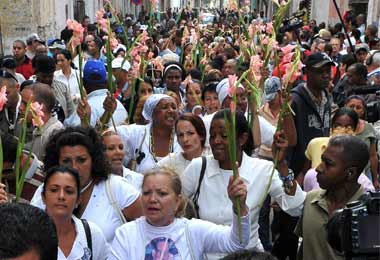 An acquaintance of my mother, who lives very near to a Lady in White, told her that they are under orders not to assault these women in light clothing with gladioli in their hands. The same lady, who until recently wore a sneer of disgust when talking about the masses at Santa Rita and the pilgrimages on 5th Avenue, today was on the point of shaking hands with Laura Pollán and asking for her autograph. Perhaps another neighbor, who screamed “The worms are rioting!” last March on national television, is now confused and waiting for new orders to return to her rants. The mechanisms of false spontaneity have been exposed by this truce: the manufacture of that supposed popular response is confirmed by this interruption in the attacks.

From the point of view of the official discourse, the people who have been released from prison in recent weeks deserved to be prey. Using this argument, and certain known pressures, they mobilized Party militants and members of the Committees for the Defense of the Revolution to participate in so-called “repudiation rallies” where they spat on, insulted and knocked about the Ladies in White. Now the energetic troublemakers who came to “defend the Revolution against the mercenaries in the pay of the imperialists” should be expecting some explanation to justify the prisoner releases. It would be interesting to go to a meeting of the Party nucleus to see what secret revelations they come up with, because if none are offered they will end up seeing themselves as pawns in the control of those who incite them one day and then the next day command them to keep quiet.

My mother’s acquaintance doesn’t hide her confusion. “There’s no one who understand them. Yesterday they called us to insult them, and today we’re not allowed to touch a hair on their heads,” she says. The truth is that here, where it seemed like nothing would ever happen, we are suddenly in a situation where anything can happen. At what point did history begin to change? Perhaps in the damp, dark, vermin-filled punishment cell where Orlando Zapata Tamayo decided to sacrifice himself; or in the sterile, chilly intensive care ward where Guillermo Fariñas stuck by his decision to die if they were not freed; or in the streets of Havana, where some defenseless women defied an omnipotent power by screaming the word freedom, where there was none.