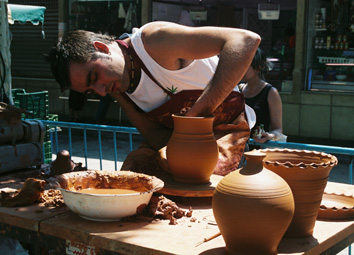 After two months, uncertainty fills the Cuban scene. The government still has not specified the principles that will govern self-employment. Meanwhile, the number of the unemployed and the expectations of the population are increasing.

One of the concerns raised is whether the government will grant rights to the self-employed in order to extract administrative concessions, bearing in mind that it considers the activity of individuals as an adjunct of the state.

Up to now it has said nothing about this. But several of the activities authorized for self-employment are related to the exploitation of mineral resources, such as quarrying, and producing pottery items for sale.

Others, like producing and selling granite and marble items, remain stalled, according to the official newspaper Granma, because there is no legal market for acquiring the goods.

The Ministry of Basic Industry is authorized to grant or deny mining concessions for small deposits of certain minerals, recognized by the Constitution of the Republic as properties of “socialist state ownership of all the people.”

Two years ago, the citizen Amada Pupo Cisneros presented an application to the National Office of Mineral Resources for exploitation of mineral clay in the town of La Estrella in Las Tunas. His claim was rejected by the recently deposed Minister of Basic Industry, Yadira García Vera.

The former government official denied the right on the recommendation of the National Bureau of Mineral Resources, which determined that the request by Pupo Cisneros was contrary to the general principles of the practice of self-employment.

Since 1992, state assets can be transmitted, wholly or partially, to the proprietorship of private persons or corporations, with the prior approval of the Council of Ministers or its Executive Committee. But the government only recognizes this right for foreign investors.

Cuban nationals like Amada Pupo are excluded. Their participation in the national economy is seriously limited by the Constitution, by Decree-Law 141 of September 8, 1993, “On Exercise of Self-Employment”, and by other complementary legislation regulating this right.

Article 21 of the Constitution recognizes private ownership of the means and tools for personal or family work. But it restricts that right by prohibiting their use in obtaining income from the exploitation of the labor of another.

Despite being a constitutional right, in the last parliamentary session the President of the Councils of State and Ministers, and a member of the Politburo and Deputy Secretary of the Communist Party of Cuba (PCC), announced that his government would lift some restrictions on the exercise of self-employment, including hiring labor.

Nevertheless, the government made clear that it will maintain its policy of identifying, monitoring, and controlling these activities, and who can perform them. It will also oversee the conditions of marketing the products and services of the self-employed. According to the newspaper Granma, an official organ of the PCC, the measures will become effective, without specifying the day, starting in October.

So far, the socialist government denies its nationals the right to draw on public services, natural resources or public works, although the law gives them that possibility. We will have to wait and see if they change the discriminatory principles of state policies and its system of exclusion. It is time that the Cubans become involved, on equal terms, in their own economy.