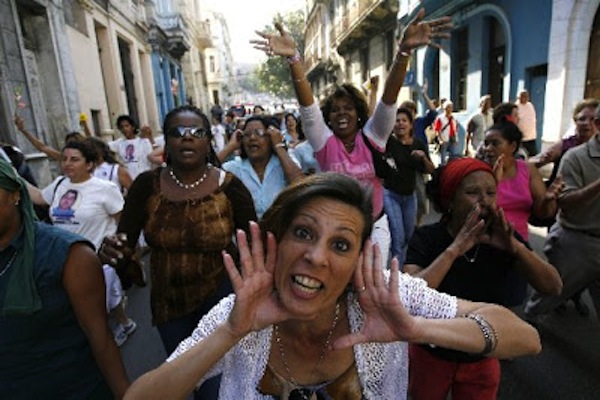 “Reagan wears a skirt, we wear pants, we have a commandant whose balls roar!”(Revolutionary slogan made famous by Felipe Pérez Roque)

Havana wakes up early, and before 8:00 am and there is a swarm of voices and movement. Old cars and buses rattle around the city, people crowd at bus stops and at the curb, the new day of survival sizzles. Just one block from Carlos III, a main avenue, dozens of teenagers huddle around the “Protest of Baraguá” middle school staving off morning classes as much as possible. Regardless of gender, lively, haughty, irreverent, almost all speak loudly, gesticulating and shouting from one group to another, from one sidewalk to another.

A neatly dressed and beautifully groomed student stands on her toes while she places her hands on either side of her mouth, like a megaphone:

The kid in question, half a block away, turns to the girl and laughs:

“Hey, Carla, what’s the problem? Did you catch the hash? Now you can’t stop itching and I gotta go and “scratch” it?”

“Oh, honey, you wish! You aren’t man enough for that!”

The brief dialogue is accompanied by exaggerated, lewd gestures.

Dayán approaches and they greet each other with a friendly kiss and much fondling. They join an adjacent group of classmates chattering among themselves. Every once in a while, strong words fly, like the morning sparrows in nearby trees. I look carefully at the big picture. Greetings among these young people can be a spank on the bottom, a kiss, or an expletive straight from a tavern of pirates, with an ease borne of habit. 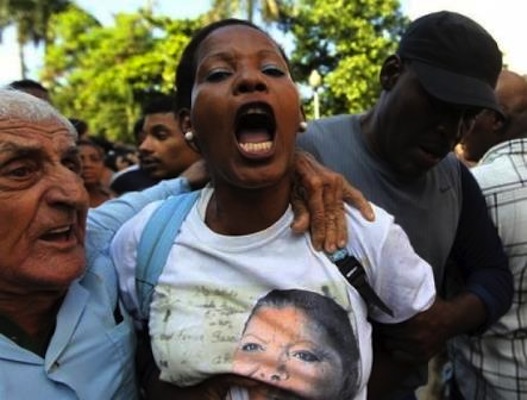 I approach the group and identify myself as a reporter. I want to ask them some quick and simple questions before they have to go through the school gates. I make it clear to them that I will not need their names, that I will not record their answers and that I will not take their pictures if they don’t want me to do so. Some move away a little, just in case, but stay in close range, as if to hear everything. None wanted to be photographed.

Where did you learn to express yourself like that? Do your parents allow that at home and your teachers at school? Have you been brought up in a violent family environment? What is your interpretation of rudeness or cursing? How would you define the language you use? Is your vocabulary found in any of your Literature or Spanish Language books?

After some hesitation, it’s Dayán himself who breaks the ice.

“It’s OK, nuttin’, auntie, it’s normal. Everyone speaks this way and everyone knows what those words mean. At home, you have to be careful, because parents get upset if you swear a lot, but they do it just like nuttin’. Teachers rarely butt in. There is nothing wrong with that. Look, at home, there is no violence like that. I have never been hit. OK, so maybe I got smacked when I was younger and did something bad, but ‘normal’ like everybody else”.

Then others jostle to talk and offer their opinions, interrupting each other. All agree that what is happening is that in “my era” they did not talk this way because they were behind the times and there was less freedom, but “that was before”. Cursing is now “normal” (let’s say very advanced). It is true that our vocabulary is not found in books, but books are one thing and real life is another. The same is true of TV, for example. I dig a bit more and discover that not a single one of them has ever read a novel. They don’t even know about poetry. To sum it up, vulgarity is not so vulgar for them, and foul-mouthed expletives are the norm.

The school bell warns that morning classes are about to begin, and the kids push each other as they go in, laughing, having fun. I am obviously “over the hill”, kind of a brief anachronism for that day. Some, very few, say goodbye to me before turning their backs and walking away.

But just as not all young people are vulgar, the vulgar are not all young. The epidemic of rudeness that has become endemic is not a generational thing, but a systemic phenomenon. 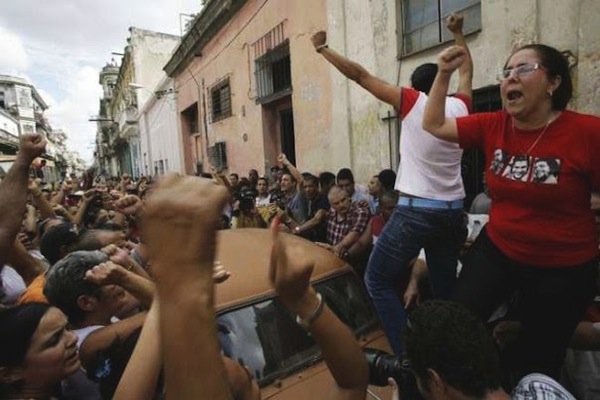 In the afternoon, I go to a nearby avenue and skirt the lateral passageway of the Carlos III Market, by Árbol Seco Street, where taxi drivers hang out to gossip daily between fares. They drink espresso or refreshments for their parched throats. Every once in a while, profanities sprinkle the talks, especially in the friendly, loud discussions about national baseball series or car prices, whose sales were recently allowed by the State. Adolescence is far behind them; many have some gray hair to comb, others have even lost their grays.

I ask the area’s septuagenarian parking attendant if the regulars always use such foul language or if it is only in the thrill of the moment. “That is normal here. They always curse, even in the presence of women and children.  There is no respect, and if you say something to them, it gets worse, so it’s better if you keep quiet”. I make it clear to him that I will not say anything to them.

Indeed, if I tried to complain to all those who express themselves using profanity, my whole day would be spent doing so, and would have gotten smacked more than once. In Cuba today, correcting someone’s manners and language is considered unjustifiable prudery: aserismo* prevails . But how and when did it all begin?

While it’s true that there have always been people who are vulgar and people without manners, only lately has rudeness invaded Cuban society, so much so that it is impossible to avoid. Contrary to the official discourse that advocates for education and culture of this society, vulgarity as a particular form of violence seems to be here to stay. From using the most foul language to the very masculine impudence to urinate in public and in broad daylight, our daily lives are becoming ever more aggressive.

If we were to explain the history of the empire of vulgarity on the Island using some of the prosaic words that have been incorporated into everyday speech at different times in these 55 years from vulgar egalitarianism imposed as state policy, probably only a Cuban brought up in this environment could understand something of the lexicon. Perhaps the story could be summarized as follows, and readers will forgive me, as I only intend to illustrate:

At first it was a guy who stormed a barracks with a group of ecobios, although when he left he was on fire when the shooting began. It became pretty bad and lacking in cold, and the ones who went to prison were better off. But, since they were such crazy dicks, at the end, they and the other cuties who joined them along the way took the bunch here, by their balls, gave Batista, who was a weirdo, a good poison, and that is how this dark affair began since here everyone is the same salsa, so whoever has an itch should scratch it, and if not….tump tu tum tump tum, bolá. Politeness and sentimentality ended, and shake it so it goes off* which one is it?

The spread of foul language and loss of good manners is already a feature of the Cuban society of the times, to the point that the general-president himself, Castro II, has publicly expressed alarm at such vulgarity. Social vulgarity, that sort of bastard child that the regime now refuses to recognize as its own, has passed out of the masses and reached the sacred threshold of its parents. And it scares them. What if one day such uncontrolled crudeness becomes violence against the throne?

Diligent criers, meanwhile, have responded immediately to the master’s whistle. Language, Did Good Manners Take a Trip? is an article where the official journalist Maria Elena Balán Sainz, after lamenting about the rudeness of speech and manners currently governing Cuba, especially among the young, delves into an analysis of the origin of the Spanish spoken in the Island and its lexical relationship with other countries in the region, on the evolutionary theory of language, its importance in human communication and care, about which she insists that, “Although it seemingly may fall on deaf ears, we cannot stop the battle for the proper use of our language, although there are marked tendencies in recent times toward popular slang language, occasionally with vulgar ingredients”.

Even she could not escape the clichés that in Cuba each issue becomes a “battle” and where all “official strategy” gets shipwrecked in sterile campaigns, though we can recognize the good intentions of her article. However, her article seems to imply that the vulgarity and crudeness emerged suddenly and spontaneously among us without cause or reason, as naturally as if it were fungi on animal feces in a pasture. Balán Sainz does not mention, even once, the coarse rusticity of revolutionary slogans, swearing in repudiation rallies, vulgarity in assaulting and beating by those who think as indicated by the olive-green creed, or rudeness stimulated and wrapped from power to try to nullify those morally different.

Those waters brought this mud …

Now, using my own words for the review, I’d say that, at first, it was the violence of a social revolution that came to power by force, which expropriated, expelled, sowed exclusions, for political reasons, of religious faith or sexual preferences, which imposed egalitarianism, condemned traditions, separated children from their parents’ home in order to indoctrinate them, fractured families, condemned prosperity, kidnapped rights, stifled the creative capacities and independence of individuals, standardized poverty, pushed an infinite migration that plagues and cripples us. I cannot imagine greater vulgarity.

Now, when Cuba looks like a scorched land, her economy ruined and her values misplaced among old slogans and constant disappointments, the regime is perturbed by the rudeness and poverty of speech, which move along proportionally with the system’s general crisis.

But Balán Sainz is somewhat right when she reminds us that our lexicon is a reflection of our social reality. Lowly, vulgar and violent language belongs in an impoverished country, where each day we can feel more and more the frustration, the precariousness of survival and the tendency for violence. It is part of the anthropological damage, so masterfully defined by Dagoberto Valdés.

Are there solutions? Of course, but they will not be spontaneous. Only the end of the rude Castro dictatorship could mark the beginning of the end of aserismo in Cuba.