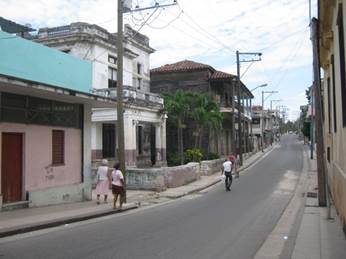 Fernando Damaso, 9 March 2017 — The Electric Union (UNE), the Cuban State Electric Company, plans blackouts for repairs, maintenance and tree pruning that affect its aerial networks. Generally, the extend from 8:00 in the morning to 5:00 in the afternoon, directly affecting citizens in their homes, and the production of state and private services.

The extended times planned, generally don’t correspond to the work done; it’s common to see some workers working and the rest wasting time, sitting around in the streets and sidewalks, paying homage to unproductivity or, as a foreign friend ingeniously told me one day, “Those who don’t work, are most of them, and they honor those who do work, which are the few.”

Sometimes the repairs, due to their poor quality, have to be repeated. On my block, one entire day, they spent time replacing the wires and, a month later, came back and did it all again. I questioned the brigade chief about it, and answered that the previous ones weren’t adequate. A similar situation is frequently repeated. It seems that UNE legalizes the unproductivity and the irresponsibility.

If they had to compensate those affected for all the affects generated by these “planned blackouts,” I’m convinced that they would be much more careful and productive.

Perhaps they should take account of the experience of the former and antiquated Cuban Electricity Company which, with much less sophisticated resources, undertook all these works without affecting the consumers and with little impact.