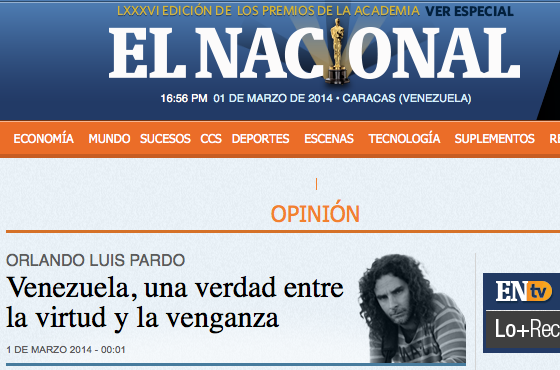 The Cuban people will go down in history as the people who most contributed to Latin American disintegration. Disguised by the ideological hatred of capitalism, we bit into the core of fratricidal hatred on our continent. This guilt today covers several generations, irreversibly anthropologically damaged. There is no forgiveness capable of freeing us from this criminal responsibility.

Since January 1959, a bourgeois and pro-democratic revolution, with strong hints of urban terrorism and a certain Cuban-style Protestantism, was re-channeled by Fidel Castro into an agrarian and anti-imperialist process, and ultimately turned into a dictatorship of the proletariat and an extreme alliance with Moscow in the context of the Cold War.

The United States did nothing to avoid the artificial radicalization of the Revolution. Rather, great arrogance and a touch of ignorance led to the victimhood with which we Cubans justify a regime of injustice and impunity: massive social programs but not for those human beings who weigh in with an opinion (whether for or against, discipline in the face of despotism was always the key to survival in times of revolution).

Thus, Castro took thousands and thousands of lives, not only of his opponents (many of them armed), but also of Cuban revolutionaries, the majority executed extra-judicially — many of them were tried after they were shot — as soon as they manifested the least symptom of dissent to the official totalitarian discourse.

Cuban society came unhinged within a few months. No press remained. No religion one could publicly confess. No independent education, only that imposed “for free” by the State. Nor was there personalized healthcare. Nor commercial brands. Nor “human rights,” a term that still today sounds like an insult within Cuba. All exchange of international currency was abolished. We could not leave nor enter the country. We could not connect by phone with the outside nor receive a letter without being fired from our jobs.

Those who could flee, fled. We are still fleeing. It is our permanent plebiscite before a government that never listened to its own people: flight as a reaction to asphyxiating Fidel-ity. Those who remained on the island shut up or went to prison with long sentences — and terribly cruel tortures — like those that made Nelson Mandela, for example, a global icon.

We non-Castroite Cubans never became icons of anything. We were simply “worms,” “traitors,” “scum,” the “lumpen” of the “first free territory in America.” In American academia, especially, where Castroism had been “politically correct” from the very beginning, the greatest Cuban intellectuals, like the exiled and ultimately suicidal Reinaldo Arenas, never found shelter.

Then we imposed death on Asia, Africa and the Americas. We tried to spark 1,959 Vietnams all over the planet, possibly with nuclear missiles installed in Cuba behind the backs of the Cuban people. We invaded sovereign nations like Venezuela, and forever traumatized the fragile democracies of the hemisphere in the interest of a violent seizure of power, in uprisings or false populist movements that implied the scaffold for class enemies.

Just around the time our failure was obvious, with the fall of the global Socialist Camp, we used the money from other genocidal powers — such as Libya, North Korea and Iran — to encourage the false socialist democracies of the 21st century. Finally, it’s now Venezuela’s turn. A country that for many decades has been on Cuba’s death row, as General Angel Vivas reminded us a few days ago from his besieged home.

The Venezuelan people slept, like so many in the region. And in addition, it was a nation that evolved in its incessant clamor for a more just social system and less political demagoguery; this sequel we’ve dragged with us in Latin America since independence only bequeathed to us its retrograde string of caudillos.

Free Cubans, in Cuba and in exile, deplored Hugo Chavez from before his triumphant election. We never believed in his cynical smile. We didn’t even trust his most transparent election. Cubans know that the butcher’s hand of Castro never fails. But the world labelled us, then, reactionaries, “Batistianos” (half a century after Batista), and “Washington’s mercenaries” (as, in effect, many of us had no choice, having lacked a country in perpetuity). And, still worse, they spat in our face the stigma of being the intestinal traitors of the universal cause of Revolution.

Today Venezuela has taken to the streets, it “has had enough and has begun to march,” to the scorn of Ernest “Ché” Guevara, Salvado Allende, and other victims of Castroism still not recognized as such. In Venezuela the exploding popular tide is not political, but rather one of founding resistance. There where dictators and democrats have failed, the Venezuelan people understood that they were looking at their last chance. The alternatives to Chavezism, with or without cancer, were becoming obvious to Venezuelans after a decade of decline: Castroism in perpetuity or Castroism in perpetuity. They would never escape this monolithic idiocy if they didn’t escape it now.

Venezuelans are a lovely and free people, as were Cubans. It is now that they have to break the chains of constitutional fatigue. The Castro regime has never before been in such danger of finally beginning to disappear, with or without octogenarian Castros dictating their death ordeals from an interred, inhuman Havana.

Your freedom is now or now, Venezuela, still miraculously alive in this terrible trance were even vengeance seems like a virtue.