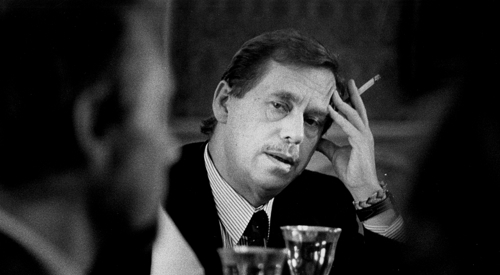 It came carefully wrapped in a page of the newspaper Granma, but bore no relation to that official organ of the Communist Party of Cuba. The dull wrapping was just camouflage, the mask under which a copy of The Power of the Powerless by Vaclav Havel was hidden. The friend who first brought it into our home had been ousted decades earlier and was expiating his crime in some forgotten department of the public library.

Like the Czech playwright and politician, our supplier of “banned literature” had shown his concern over the entry of Soviet tanks into Czechoslovakia in 1968. For Havel, his position had cost him the banning of his work, harassment, and even prison, while our acquaintance had better luck and only lost his promotion, the possible Soviet-made Lada car he might have earned, and his wife — who could not stand living with someone without privileges.

This shared ordeal might have brought about the sympathy expressed by that habanero in his fifties for the man who would become the first president of the Czech Republic. He spoke of him as if they had shared space in Tvar magazine or in Charter 77, with the camaraderie of a cellmate.

Punished politicians have an immediate predisposition to solidarity among equals, and recognize and admire each other from afar. So, more than once, in informal gatherings and conversation, the gift-giving librarian declaimed fragments of Democratic Ideas: The Arms of Freedom. It was his obsession and also became ours.

Words live fighting with power, culture rarely has access to the political heights. Its creators wash their hands of it and assert – not without a certain hypocrisy – that they aren’t interested in public office, that government is something dirty that ends up paralyzing the pen and muddying the soul. And they have a good point, as the historical misfortunes of president-writers and artist-ministers confirm.

But still, we must not settle for the reign of the ordinary and the regency of the mediocre. Fortunately, once in a while creation and political office are not mutually exclusive, ideological play and the beauty of language come together in one individual. Coming from the theater, Vaclav Havel was familiar with the deceitfulness of human nature, with the certainty of its masks and its moods. Poetry provided him spiritual armor, an essential inner courage to survive in a totalitarianism whose favored weapon was the invasion of privacy.

His own literary work probably saved him from suicide, from being paralyzed by the ostracism this kind of regime directs to nonconformists. The man of letters never let the political animal get the better of him. Nor did prison manage to convert him into screaming leader demanding a rematch from the podium.

He knew that from the other side of the stage the audience could applaud or whistle when the spectacle ended, he was prepared ahead of time for the vagaries of popularity. Havel was a scriptwriter. He decided to write the libretto of his days and left the secret police nothing but the ability to scribble a few glosses on the margins of his life.

A portion of Cuban intellectuals – who even today won’t admit it – was captivated by this rare specimen of poetic writer and activist. Few dared to publicly profess their admiration for the leader of Civic Forum, or to acknowledge that they read his texts. But the truth is that when certain breezes of Perestroika blew over the official media of this island, he was one of the most common references among journalists, novelists and playwrights.

The cult of Havel kept its voice down; only a few of the intrepid, like our ousted friend, dared to leave the house with one of his books under their arms… of course it was always wrapped. The Czech president enlarged the pantheon of banned faces and censored figures. We lost Havel, as we had lost Alexander Solzhenitsyn and Milan Kundera. Because, as he himself said, “Between the plans of the post-totalitarian system and the plans of life there is a deep abyss.” We wanted to learn more of Havel, but in the Plaza of the Revolution they always had other ideas about what we should know.

Last weekend  Vaclav Havel died, just at the time when he was most read in Cuba. He left and we can’t hear his voice in a classroom of our University, nor listen to his extensive collection of anecdotes about the years of Soviet control. Raul Castro’s government still hasn’t made the slightest public allusion to the death of the Czech democrat, but it decreed three days of official mourning for the death of the North Korean dictator, Kim Jong Il.

Of this latter, the official media of his country say that he wrote more than 1,500 books over the course of his life. None of them, today, is reading material for us. However, the author of The Garden Party (1963) and Temptation (1986) is increasingly well known and admired. Like missionaries of a peculiar religion, many now distribute his works, and spread his writings across the Island. But, in an irreverent and defiant gesture, they no longer hide the covers with the monochromatic pages of Granma.