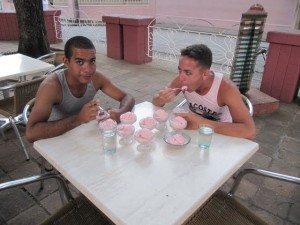 Yosuan is a sixteen year old high school student who has a special plan for his summer vacation: beach and reggae. His father is in jail. He got an eighteen-year sentence for killing cows. When his mother can afford to she gives him some hard currency, and then he can go to a high-class discotheque.

“But for sure I will ride a crowded bus toward the beaches to the east of Havana in order to take a dip, go to the movies with my girlfriend, and most important of all, dance reggae in one of those “on the left”*(1) (illegal) parties organized in my neighborhood,” says Yosuan.

In Havana, with the arrival of summer, the number of ‘house’ parties (private) increases, as do the Mettalica or Pop ones. They are improvised in a trice, and always with the desire to make a profit.

Affordable recreational options in the capital city are rare. A nice discotheque charges between 7 and 10 dollars: the bi-weekly salary of an engineer. This is just the entry fee. In order to drink a Daiquiri, Cuba Libre or Ale, you should have more than 20 dollars in your wallet, and don’t even think about cocktails.

It is not easy being a Romeo In Havana. A wad of money is more useful than a pretty face. The pretty boys can only date someone from the army of camouflaged hookers who swarm the city, promising them marriage or a USA visa. After leaving the bar or nightclub, if you weren’t cautious enough to keep 10 convertible pesos to take a taxi, either state or private, you risking getting home at dawn. The early morning public transportation service is almost nil.

The children of workers and doctors who live without stealing from their jobs, rule out recreational options in foreign currencies. Better off are the descendants of the generals, entrepreneurs, intellectuals, and musicians who travel abroad.

Those who receive dollars from across the puddle can also go to a nightclub. Although the thing is ugly. The crisis has the relatives abroad paddling upstream and making phone calls to their family in Cuba asking them to stretch the dough. People who, last season, were bragging about being spendthrifts, now are counting even the pennies.

This is what happens with Ismael, 40. “In 2010 I could do a full itinerary on children’s facilities. But this year my parents lost their jobs. I had to make cuts. I told my daughter: plays, books, amusement parks, beaches in the outskirts and carry snacks. Everything in national currency.”

Cuba is a country difficult to understand. The roof is falling in on a lot of people. They eat little or poorly, with an excess of carbohydrates and fats. Their breakfast consists of black coffee mixed with peas as a filler.

However, they are able to spend $200 US dollars on buying the latest iPhone sold in the underground market. Diesel jeans or Nike sneakers. Or a five-day stay at the Melia Las Americas in Varadero beach, paying $600 cash.

According to Alberto, manager of an office that offers all-inclusive packages on different circuits in the country, with the arrival of summer the number of domestic tourists is expected to double.

There are no exact figures, but since 2008, when Raul Castro authorized that those born in the island could stay in the foreign currency hotels, hundreds of Cubans have paid a year’s salary to spend three days enjoying the first class tourism facilities.

Despite the stationary economic crisis that Cuba has been living for 22 years, in the months of July and August the number of tourist from our own yard increases. But most people still see the tranquil blue waters of Varadero beach on postcards. Ordinary Cubans will have to settle for watching American films or Brazilian soap operas in the TV.

They are lucky if they go camping. In families where the dollars are slippery, the vacations are a headache. In addition to an extra meal, they drink more water and consume more electricity. And at night, when the boredom is killing them, they want to buy a bottle of rum. And that’s the bad news. There is no money for such luxuries.

For those who live from day-to-day, the main issue is to feed their family; summer vacations become a true torment. Add to this 90 degrees in the shade, and an old Chinese fan that when you need it most, stops running.

Photo: Stuart Kane, Picasa. If you only have 10 Cuban pesos, then you go to ‘copelita’ and ask for ten scoops of ice cream, one Cuban peso per scoop, although the only flavor is strawberry. Like these two young men did, photographed in Bayamo. Wouldn’t it have been better to be served five scoops on each of two plates rather than ten scoops in ten cups? (TQ)

*(2) Trihexyphenidyl HCL, is an antiparkinsonian agent. Alcohol may increase drowsiness and dizziness while taking this medication.( Extracted from Wikipedia.)