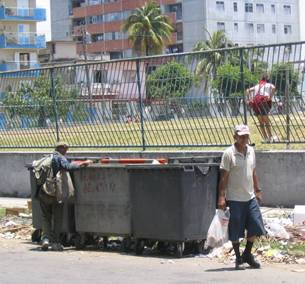 My husband, who is also a blogger, likes to gather stories and compile statistics. On one of the many days I have to go to Immigration with the son of a friend, whom I am representing, he decided to take us since he had gotten a little gasoline for his new thirty-five year old Lada.

As the lines in that office are always endless and the clocks seem to have stopped, Fernando amused himself while waiting for us in the car by compiling two curious and impromptu statistics. In the three hours he was parked on a stretch of 17th Street in Vedado, he observed that one out of every three people who walked along the sidewalk on the left was a woman of mixed race.

At the same time he was compiling another statistic. Of the seven “buzos” (“divers” — men who collect recyclables from trash containers) who passed by, one caught his attention. After removing all the discarded items from a large dumpster designed for that purpose, he left empty-handed, mumbling to himself. Fernando, who was beginning to get bored, stopped him and asked what had happened to cause him to complain.

My husband, who can be quite straightforward, then said to him, “If I were you, I would go through the trash bins in Siboney*. I am sure you will find what you are looking for there.”