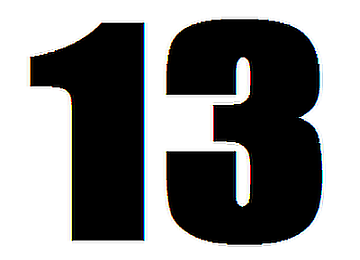 The Kabbalah, the number is not mentioned, a superstition with numbers, the calamity that even pronouncing eight letters could bring. I remember when I turned thirteen the many jokes at school that revolved around it. “How old are you?” asked the upper grade students to mock my confusion when answering. I had to respond with “twelve plus one” or “fifteen minus two,” because to say those cursed digits landed me in a wave of laughter. They also might launch a “cocotazo” with the cry of “Gotcha!” as they rapped their knuckles into my skull, and still today I’m not really clear on what that meant in that context. So I grew up assuming that thirteen not only brought bad luck, but also scorn, derision, insult.

When I moved in with Reinaldo, I thought, “What a relief! At least we live on the 14th floor and not the one below.” I imagined what if, every time I gave my address, someone shouted that sarcastic “Gotcha!” of my adolescence. The embarrassment wouldn’t reach me. Years later the doctor predicted that my son would be born on August 13, 1995, but — luckily — nature moved up the date and freed us from that “dark day.” And so, bobbing and weaving, leaving off saying it at times, and using addition and subtraction at others, I’ve escaped the dark superstition of “ten plus three.” Like me, many others have done the same, sometimes more as a precaution than from true belief in the bad omen. But now comes an ordeal for everyone: the year 2013 is about to begin.

I have the impression that for Cubans the next twelve months will not be fatal. Looking ahead, I can predict they will be full of moments of change and great times. Much of the country we know will change, for the better, and a little for the worse; new names will emerge on the national stage and others will be finally inscribed in the marble of a headstone. An era will end, making the Mayans right this time. But all this depends, perhaps in the first place, on how we citizens handle the challenges presented to us, how aware we are that we are living at a turning point in history. Beginning now I am already preparing and I repeat like a mantra: thirteen, thirteen, thirteen, thirteen, thirteen…

* To all my friends, colleagues, bloggers, journalists from all over the world, readers of my texts, commentators have made this blog yours, translators who voluntarily turn it into so many languages, to those who with your true criticisms or your acidic tirades have helped me become a better person, to all of you, I wish you happy holidays and a wonderful new year.