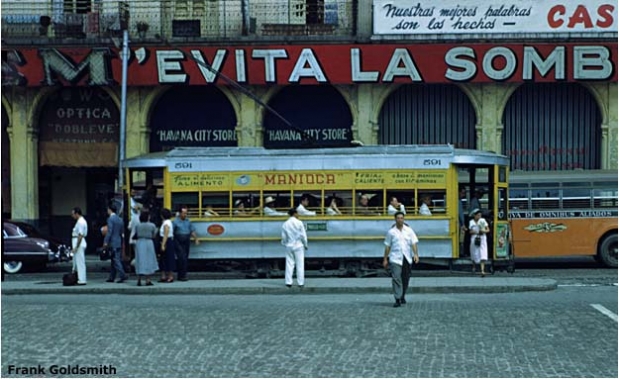 Fernando Dámaso | La Habana | 1 Jun 2014 –- My generation used trams when we were kids and early adolescents. After that they disappeared, to be replaced by English Leyland buses, supplied by Autobuses Modernos, known as “nurses” because they were white with a blue stripe running along the bodywork, which looked like the white uniform with a blue cape, which nurses wore.

Taking a ride on a tram was a whole experience in itself, with its hard basket seats, its wooden windows which you could slide up and down, and the motorman and conductor – that’s what they called the fare collector – with their ’20’s style uniforms, trying to connect the end of the  trolley pole with the electric wires, pulling on two ropes, when the pole had become detached after going too fast around a bend.

The trams had platforms at the front and the back, at a lower level than the floor of the car itself, which you used to get on and off at the stops. The former had a grill, looking like a moustache which stuck out to push away possible objects on the road, the motorman had the use of a gadget located to his left which allowed him to regulate the speed in a range of between one and nine. If he needed to, he could put it in reverse, making the wheels turn in the opposite direction. The brake was a crank located at the front, which you operated by turning it. The right pedal was used, when going up or down hills, or when it rained, to drop sand on the rails from boxes over the wheels, improving the grip and avoiding skids.

There was also an iron lever used to move the points to change the direction of the rails.

A traffic jam of trams, when one of them had a problem, lasted some time, until the broken-down one was towed out of the way onto a siding. Opposite the stairway to the University, in San Lázaro Street, in the days of the student protests, the students put pieces of soap on the rails, and the trams, abandoned by their passengers, with the motorman trying to control them with their shiny bronze crank handles, shot off downhill, crossing Infanta at top speed, and often getting as far as Belascoaín, so long as they hadn’t derailed on the way. It was also very impressive going down the Loma de Jesús del Monte, where they got up to a high speed, until they arrived at Toyo.

The trams were made of wood and iron and were painted white with yellow stripes. On their front platforms, over the windows and on the right, there was a large letter which indicated the stop – V, Vedado: P, Príncipe; C, Cerro; S, Santos Suárez; and M and L, Jesús del Monte – followed by a number for the route or line, and, on the centre another number which was the vehicle series number.

Under the windows and above the grill, a flag with colours indicating the itinerary: Lawton-Parque Central, Víbora-Vedado, Cerro-Muelle de Luz, etc.

You paid with a special token showing an H in the centre, which had engraved on one side “Havana Electric Railway Co.” (the name of the company), and on the other side “Good for one journey”.

Crossing in a tram over the Puente de Pote, now called the Puente de Hierro, you could see the transparent and clear water of the Almendares River, which was not contaminated in those days. The El Vedado trams looked more elegant. The passengers got on them and got off again in a ceremonious manner at the different stops. It was a comfortable, slow, democratic and safe mode of transport, belonging to a world now gone. It had more to do with a straw hat than a cloth hat.

The Jesús del Monte stop, popularly known as the “The Viper”, was a hub, with cars entering and leaving, with all type of businesses around it. When the bigger buses came along, the traffic got worse: trams and buses crossing and overtaking with just a few centimetres separation, only avoiding scrapes by the expertise of the bus drivers, since the trams moved on fixed rails and couldn’t manoeuvre to one side.

When it was decided to take them out of service, most of them, after having the motors, bearings and trolley poles removed, were used as filling for new streets and avenues, principally in El Vedado and Miramar. Now they are lying under them. They removed the overhead cables and the tracks, some of which were simply covered over with asphalt. Sometimes they stuck out of the many potholes that existed. One of the last trams, converted into a cafe called “Desiree”, remained for several years on a site near the Fuente Luminosa.

The tramway was noisy, and open to the elements, the best way to enjoy it. When it rained, everyone ran about, trying to close the windows which, given their primitive system, they tried several times, and the conductor had to come and help the passengers. If the tramway was near the pavement, there was no big problem in getting on and off, but if it was far away, nearer the middle of the street, it was impossible not to get wet, apart from having to be careful not to be run over by any motor vehicle. There were lots of accidents like that. The tramways were part of an era, and disappeared when it did, leaving those of us who enjoyed it with happy memories