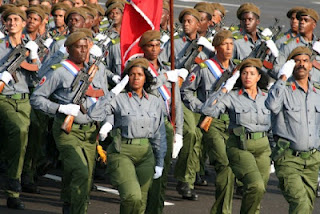 In the official newspaper — of course no others are allowed to exist — a “journalist” published an article titled “Trampling innocence,” where, exalted, he concerns himself with highlighting some children’s games where they pretend to “kill.” He tells us, “They can hide these irresponsible attitudes in the future; and although habit does not make the man, it least it identifies him.”

The writer also highlights that another group of children ran some remote control toy cars over some soldiers, who are seen as human figures, and the one who ran over the most received the biggest ovation and shouts of victory.

Then, wise, he emphasizes, “The formation of personality is a process of sedimentation of behavior, values and influences. Could not the ’naive violence’ shown in the game be a pattern that prevails in the future? It’s worth pondering.”

And he says, “It is not a secret, because the Law so provides, it is the responsibility of parents to form the character of their children.”

When I finished reading it I wondered how could a journalist in middle age, as evidenced by the photo accompanying the article, could trample his innocence, or worse, the readers’. How many times have we called attention to militarism and, therefore, the violence that the government plants in children?

For as long as we can remember they’ve prepared us physically and psychologically to kill. What is the point of the “Boy Scouts” other than to direct you in the first steps in military rigor, the life of survival in extreme situations? Since children are part of the military circles, military units led us, taught us to handle the military technique.

We, according to the education we received, are a product of the revolutionary process which we must and have to defend with our lives. From an early age they made us go and hold a gun made of wood or tin. They filled the island with shotguns, because the slogan was: “Learn to shoot, and shoot well,” and the investment was made by SEPMI, a direct offshoot of the army.

We had a subject, which still exists, read well: a subject called “Military Readiness” for little boys and girls, as important as the others when it came time to average the grades by which they assign those who will study for future professions. A subject to accompany you for the rest of your life, in high school, in military service before college.

Even then, in the university, the preparation continues. And after graduation, you still part of the army and from time to time are required to stay for a month or more in spring training. The Sundays of MTT, which fill our neighborhoods, understood as the spaces of childhood, with dark scenes of attacks, gunfire, smoke and explosions. And we, the children we were then and now, witnessing all these scenes of death.

While we postpone our games because we wait for the adults to finish with theirs, but with real guns, and we returned to the streets, while we wait for our mothers and fathers to come home, in their sweaty uniforms and muddy boots, with barely the energy to clean the house, only their bodies begging for a bath, food and rest. And we are left with: imitation, going to repeat those fires, to occupy the barricades with sacks filled with dirt.

To this add, of course, always removing the mask of innocence and pointing to reality,that the national television programs in prime time are about the police, incorruptible heroes, who through violence reach justice. Just remember those great series: “It had to be in silence,” “Julito the fisherman,” “Something more than dreams,” among many, presentations that, like it or not, marked our personality of who we are today, and our parents unable to prevent it, even if they were aware of future consequences in the human beings we would later be. But how to stop events, time, isolate us from everything?

I believe that the journalist, perhaps with the best of intentions, tramples his own innocence, or underestimates the society by concealing that the true reasons for the current violence is transmitted through the speeches, the perennial fear generated in us about invasions to our shores, air strikes, among others.

Cuban society in these 54 years of political process that governs us, above all those of us born out of chaos, were raised to kill a perceived enemy that never came. We still await the impending attack of the United States, so that several generations of Cubans sacrificed their lives, putting their hopes on a better future that never came.

I remember in the innocence of my generation as we played at killing like cowboys, but most wanted to be Indians, Apaches defending their territory because we saw the gunmen of the West as abuserswho wanted to impose their law, steal our land, our tranquility and impose their customs. We learned from American movies with which they also roasted us, just before the arrival of Soviet war movies and the rest of the socialist camp. They twisted our culture, the look and the innocence.

Hopefully the most objective of the writer is his call for “reflection” which would be worthwhile for anyone, though, we understand, he didn’t have the audacity to name it directly because that would be suicide, closing the door to his existence as an official journalist. Because ultimately, what we are, good or bad, we owe to our rebellion or to Fidel Castro, who imposed the rules with which each generation must comply.

Bifurcated ways that everyone, rolling or rocking his innocence, took for himself.