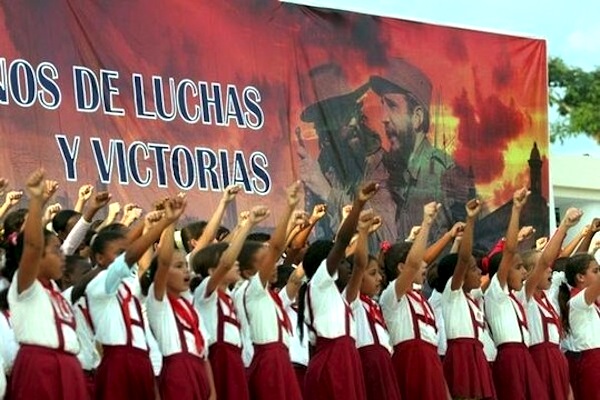 HAVANA, Cuba – Very often we hear the officials of the Ministry of Education stress our country´s successes in this field from 1959 onwards, and we ask ourselves how can they possibly talk about this without the slightest shame, ignoring the profound loss of values confronting Cuban society, when even Raúl Castro, on July 7, 2013 at the 1st ordinary session of the 8th Term of the National Assembly of Popular Power recognised that for the more than twenty years of the Special Period “there has been an acceleration of the decline of moral and civic values such as honesty, decency, shame, respect. honour, and an absence of sensitivity toward other peoples´problems.”

With these words he recognised that the destruction of Cuban society did not start in the Special Period. What happened is that, from the start of the totalitarian Castro dictatorship, Cubans have had to lie, be dishonest, distort childrens´ education and many other things in order to survive.

Now they say that the school and the family are fundamental in the development of the citizen, but for many years they have not cared about the training and care of the educators. In Cuba, before 1959, they had achieved great advances in public education, and although even more effort was needed to deal with the serious deficiencies in rural education, our schools were forming professionals capable of improving the culture and education of our people.

While it is true that the literacy campaign was an important event in the fight against illiteracy, not everything was wheat, because at the same time a difficult period was starting for Cuban teachers.

With the intention of imposing an educational system which would answer to the interests of the new government, they introduced the law nationalising teaching and set up a unitary educational system under the pretext that the schools we inherited were schools which tended to serve the “spurious” interests of imperialism. Those teachers who were against this were removed from education. The Kindergarten “Normal” Schools, as well as the “Normal” schools for teachers, disappeared, and distinct programmes started up for turning young people into a new type of teacher, like the voluntary teachers (who took intensive courses in the Sierra Maestra). the Makarenko teachers and, more recently, the emerging teachers.

In 1975, in view of the scarcity of teachers, they started the Teacher Training Schools, where 6th grade pupils entered, and which functioned until 1990. These schools started up again in the 2010-2011 academic year, now with 9th grade pupils. There are 22 in the country and this year will be the first graduation.

This is the way they improvised teaching: with kids, adolescents and young people without either the teaching experience, nor the necessary knowledge to carry out the complete activity of teaching and educating.

At the same time, the arbitrary programmes applied in the system, like the boarding schools in the country, where the students had to devote a part of their day to farm labour, separated the children and young people from their families at decisive stages in their upbringing, which accentuated the loss of values.

Also, during all those years, there was the continuous exodus of teachers, driven by the low salaries (no more than 400 Cuban pesos a month, less than twenty dollars U.S.), as well as the poor teaching methods, which impacted on their professional evaluation, and the very bad working conditions.

Nowadays the Cuban school is characterised by the absenteeism of pupils and teachers, by the inappropriate form of dress and way of addressing each other, and also some teachers frequently use obscene words to control the students. And we can´t avoid mentioning the deterioration of the state of the facilities.

As a result of all this, the recent scandal about fraud in the maths exams to enter higher education was no surprise, which came to light when the echoes of the previous case were still reverberating, in relation to the maths test for the eleventh grade the previous year. And the worst of it was everyone knows these weren´t the only incidents, just the ones which were made public. And, sadly, I would dare to say that they won´t be the last. I hope I´m mistaken.