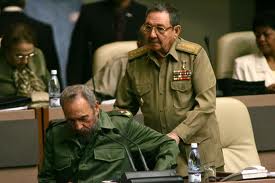 I read this phrase that I chose as a title on Facebook, and in the background were photos of Fidel and Raul Castro, the brothers who have tyrannically ruled Cuba for more than fifty years.

It’s true, those Dictators rule because we Cubans on the island obey, because to confront them is to fear losing your life; we know that we are waiting for hordes of mercenaries with machine guns and tanks that will mercilessly drive over our bodies. What is also true and also sad is that those who publicized it were other Cubans whose only rebellion was to abandon the national territory. It’s as if they have forgotten their sufferings and their fears, as if they don’t remember their past.

It seems unjust to me that those who saved their lives by putting geographical distance between them and this island, now push us to make decisions that could end in our deaths or in long prison terms, as Cubans know well what awaits those who dare to challenge the Castro brothers. It is dishonest that after putting the sea between them, they now demand attitudes that they themselves were not willing to take.

On other occasions I have said that, for the most part those who have emigrated, whom I unconditionally support for having taken this decision, complied until the last possible moment and in a disciplined way with all the laws and requirements of the regime. Most did not renounce their membership in the Committees for the Defense of the Revolutions (CDR), nor the Cuban Workers Union (CTC), nor the Territorial Militia (MTT); intelligently they remained mute so as not to attract the attention of the authorities and so they were granted the “White Card” — the permission to leave the country — an action I don’t criticize, nor would it go well for anyone who did otherwise.

But for these same reasons it does not appear just or humane that they now ask for self-immolations from those who, like them, at least desire and need to survive the totalitarian system that rules the Cuban archipelago.

As it is also true that if all of us had remained here, the country would have exploded in a popular revolt like a pressure cooker, from the pressure of the terror, freeing ourselves from these dictators whom we have suffered for such a long time. Some would repeat the popular phrase: it’s easy to push without hitting.

To reach such conclusions is offensive, because to humiliate those on either shore is useful only to our enemies. Better they should suffer for their compatriots left inside here, and try to care for them, because in the end most of the dead and the prisoners are those of us who stayed from the conviction that we must find, together, the road that leads us to the democracy that Jose Marti dreamed of in the century before last, and that we still have to conquer.

I always say that those inside the island and the outside create the perfect scream. Without them — without you — we would be only half, our pain would find no echo, nor, therefore, any receptors. Our pain comes from the mouths of those who are in the lands of freedom, those who are not persecuted by censorship, and those who have no henchmen waiting at the doors of their homes to silence them with blows.

And so, both sides, the exile and those of us who inhabit this island of ghosts, we need strength, we are the perfect chemistry to oust the tyrants of this place that belongs to everyone equally.