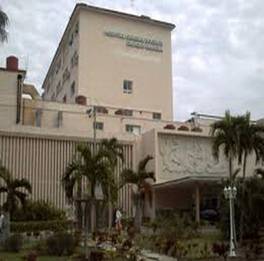 Again the topic of health in the former medical power occupies me. Of course, you only know of these incidents through close friendships or relatives who have gone through these critical moments.

About twenty days ago, my cousin urgently had to go to the hospital closest to her house. She accidentally fell in her patio at home and fractured her hip. When she arrived at the National Hospital, by fortunate coincidence she ran into a doctor who is a very close friend, almost like family. While she waited on the stretcher talking with her physician friend for entertainment, a family member, who came with her in the ambulance, went home to pick up bedding, a bucket, an electric blanket, jars of water, a pillow and fan, among other things, that one is required bring in order to be admitted, and if you want minimal sanitary conditions.

He told her that for several days he had barely left the hospital because his sister had recently had surgery and was in a delicate state of health. He confessed that the first operation to which she submitted, about 20 days earlier, was to remove a malignant tumor. Two or three days after that intervention, she still had a lot of serious pain, so they took her to the operating room again for another surgery because they had left gauze inside her, causing an infection and unending pain. Again, two days later she returned with the same pain and fever. A third intervention was necessary and this time he accompanied the surgeon, a friend of his through others, and saw when he himself extracted some forceps that had been left inside. As a colleague and friend, he did not want to complicate matters and he swept it under the rug in order not to create problems.

Regrettably, there are many cases of medical negligence like this one that happen,but we only find out when someone close to us is involved in some way. It is not surprising, either, that doctors make mistakes. When it comes to compromising the life or health of a human being, these are unforgivable. Seemingly the great majority of Cubans are victims of the syndrome of forgetfulness due to the accumulation of personal problems that overwhelm us. It is not in our power to solve all these problems, which forcefully assault us daily, making us commit all kinds of mistakes in any activity. In terms of the medical sector, the majority of such mistakes are irreversible. But if they kill you, they don’t have pay you.