14ymedio, Natalia López Moya, 29 June 2021 — A group of women went out to protest Monday afternoon at Calzada del Cerro, in Havana, after their homes were completely flooded by the heavy rains of the day. The photograph of three of them stopping traffic on the avenue with their furniture and refrigerators quickly spread through social networks.

“They went out to the street because the tenement was flooded again and everything got wet,” a neighbor in the area told 14ymedio. The women are residents of a tenement known as “el solar de Míster Joe,” after the name of a cafeteria at the entrance, located on Calzada del Cerro, between Auditor and San Pablo.

The women’s protest was broken up by the police, who immediately appeared at the scene, both on motorcycles and in patrol cars. However, according to one of the videos that circulated on the networks, the neighbors and some passers-by supported them when the officers intervened.

Later, trucks from the state company Aguas de La Habana (Havana Water Company) and the sanitation brigade arrived in the area to empty the building’s water tanks that had been filled with dirty water. Several members of the corps of social workers, dressed in green shirts, also showed up, staying in the area for at least an hour.

By seven in the evening, this newspaper was able to verify that the women had left and only some furniture and electrical appliances remained at the entrance to the site. 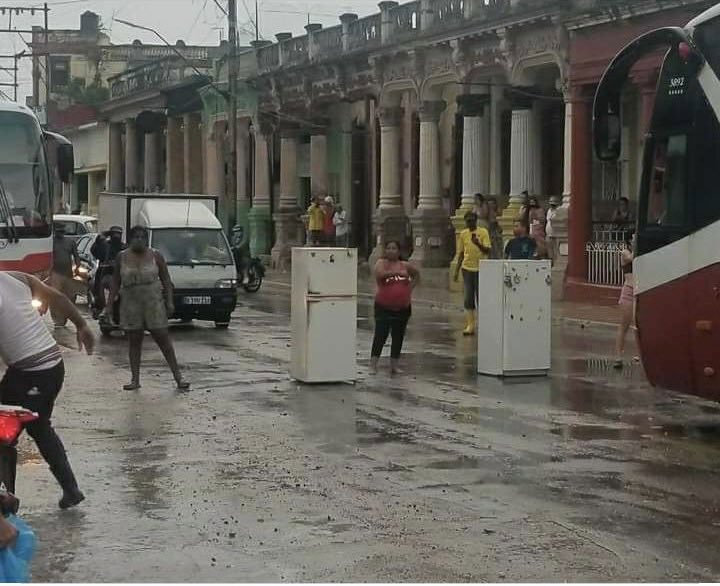 El Cerro has several low-lying areas that flood whenever there is rain, and residents have unsuccessfully demanded better a better sewer system from the provincial government. When solutions have been applied, they have been to solve the emergency, never the root of the problem.

In fact, it is not the first time that the residents of this tenement have come out to protest. In December 2018, they also took their furniture out onto the streets after suffering material losses due to the floods.