(A Contribution to Travel Literature) 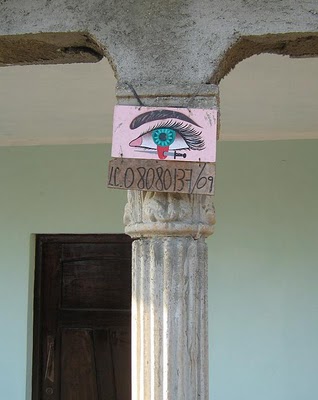 That the facilities for obtaining patents for small services trigger a headlong rush among Cubans you already knew. The restrictions on private enterprise, and chronic shortages, plus the deep social (and stomach!) vacuum left by inefficient state enterprises that have monopolized the trade, was an antecedent too pitiful to not run counter to the slightest opportunity.

By the time of announcement by the government itself that the Cuban economy may be touching bottom — supposedly now — and that the State will proceed to shake off the burden through welfare cuts, massive layoffs, of course, everyone will take advantage of one or another exits from the dominant, paternalistic and possessive authority, conceding too individuals to continues their lives once they’re left in the street: to survive on their own.

It has opened the door to private enterprise, at the last moment, as these maximum security prisons leave no other choice but to open in the middle of a flood, if the water level touches the roof. Better late than never, think the beneficiaries.

Among those who take the time to think, are those who don’t know what to do, where to invest, to ask for a license for the first thing they see, like the same “business” the next door neighbor has, or a close relative, and try their luck.

They could be parkers of bicycles, or sell soft drinks and fries, if they look and see that where they can park one they can park two, and with the same ounce of flour they can make a croquette they can make two and even three, without collapsing the black market in raw materials.

There are those who fear that at any moment the possibility of getting a license will be closed down and they rush to obtain one, though the required conditions are not yet created, but just in case. The most optimistic say it’s not going to be a cyclical play like before, in the nineties, when after the critical period passed they again received fatal notices of taxes and violations, accused of being the problem and not the solution.

But that they would suddenly be in the middle of a fratricidal war, the bus passengers between Havana and Ciego de Avila could have no way of knowing, when the driver stopped to have lunch, as is apparently the custom, in the town of Jatibonico.

This town, situated almost in the middle of the long and narrow island of Cuba, has the benefit of a central highway that splits it in two, making it a mandatory transit point for people traveling across the country.

Perhaps that is why Willy Chirino chose the place to compare with cities like Paris or London in the refrain of a popular guaracha that probes the paths of Cuban nostalgia. “Tell me, tell me, tell me of Jatibonico,” sings Chirino to the sound of the maracas.

The driver announced that with the arrival in the center of Jatibonico, at that hour of the night, the opportunity had come to put the gastric juices to work, and, as a matter of safety, his full bus needed to be emptied, momentarily.

He meant the signal of a change to be welcome, because before the emergence of restaurants, or as they are known at the grassroots level: “officially approved paladares,” it was natural that travelers had to head to the middle of the hill towards a camouflaged hut among the jungle, where they secretly met your needs.

A good traveler is docile toward the man the helm, who knows by heart not only the road but also the surrounding underworld. In any case, always in these cases, the drivers have all the threads in place with local industry to deliver a safe clientele in exchange for their own rations being served them for free. Now, very different from the adventure of rural or semi-wild food, these passengers were handed over to a more stable business, legal, also in an urban landscape. 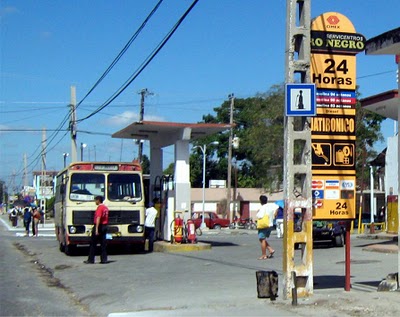 Through the windows, the square of the town chosen by the driver looked particularly promising, revitalized, by dint of lots of little lights that wanted to attract your eyes. Besides the gift of hunger, the travelers were carrying some spiritual attributes necessary to appreciate a good meal. It turns out that in this bus the delegation from Ciego de Avila was returning from participating in the International Book Fair which was held in Havana.

No more did poets, novelists and historians set foot on land seek the satisfaction of their appetites, than were shouts torn from male and female throats. Two families were locked in a quarrel accusing each other of theft. What was the item stolen?

Nothing more, nothing less than the passengers themselves, the clientele. It seems that driver had not parked in the exact one-meter strip previously agreed upon, and as there were two paladares there, one beside the other, it gave rise to the violation of a dining agreement, disorder, insults, stones, punches and general chaos. Both paladares asserted their claims to the hungry passengers.

One poetess, I say it like this instead of “one poet”, as in recent times some women who commit verses want to be identified in this way on the literary menu, because in this manner one can better understand their state of fragility and strangeness here, in the middle of this brawl she almost fainted when she saw how a machete entered and left the face of a man. Someone called for the arrival of the police, but they did not appear. And never appeared.

Across the street, where the travelers huddled in terror, trying to save themselves and also overcome the shock of knowing that they were the obscure object of desire of two bands specializing in casseroles, a villager commented that they were cousins or relatives — in any case they carried the same surname, Montague and Capulet they were not — and that more than once they had crossed the limits of their expertise, passing to carving and literally slicing each other. What was their purpose? Would they lose their licenses? They definitely were not cut out for free enterprise? Would they find the right balance between their feelings and urgent needs?

Perhaps it was the so-called depth of the blood that caused the swollen river to collect itself and finally become calm again. By then, across the street, travelers unwittingly took refuge in a portal which constituted a third palate, not less emerging but quieter, so the group ended up going there and yielding there to a much stronger curiosity.

P.S. Some days later both paladares continue open, or at least the signs announcing their services continue to hang over the street. The following photo was taking February 24, 2011, from a moving car. 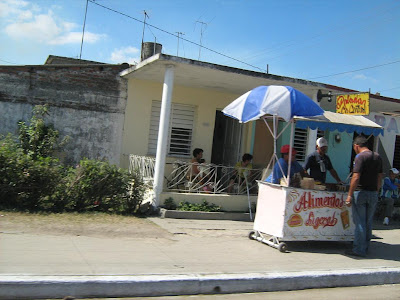