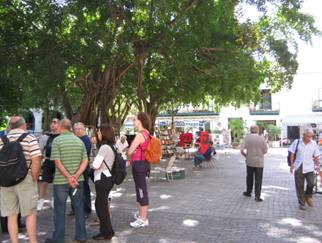 If there is one thing that has always bothered me, it is the annoying habit that most politicians, scientists, cultural figures, athletes and others visiting the country at the invitation of the the authorities have of telling us Cubans how good we have it, how happy we are, what wonderful health care and education systems we enjoy, how productive and well-developed our agriculture is, how much we have achieved in culture and sports and other nonsense of this sort. This is like “showing a top how to spin.” They repeat the official propaganda lines like trained parrots, displaying a complete ignorance of our day-to-day reality and putting people off.

It is repeated so often that it seems to have become a global pandemic. The contagion has affected people from Latin America, the Caribbean, the United States, Europe, Asia, the Arab world and elsewhere.

At times I think it is nothing more than a “diplomatic wildcard,” a way to court those in powerful with the goal of securing more invitations and future support. A form of “I’ll scratch your back if you scratch mine.”

If they realized that these simplistic and irresponsible statements are immediately seized upon and repeated in the official media as part of its continuing and systematic ideological propaganda campaign against the population and how bad they sound to the citizens who have to put up with the system they are praising, perhaps they would act differently. But this would be like “trying to get pears from an elm tree.” It is precisely because they behave in this way that they are routinely invited back and find themselves on the “friends list.” That is to say, friends of the government, not really of the Cuban people, whom they do not know.

I prefer modest visitors, the kind with backpacks slung across their shoulders, who stroll through our city, dirty and in ruins, mingling with ordinary Cubans and asking them questions, eating ten-peso pizzas for which they have not paid in hard currency while sitting on a carton in the street, drinking from plastic water bottles because they are aware of the dangers of drinking from the tap, and using the inefficient public transport system. Those are the people who know us and can say who we are and how we live!