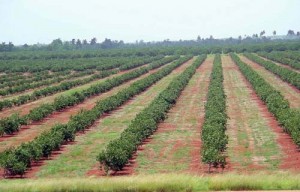 They undoubtedly ordered the official press panegyrics in honor of the Youth Labor Army (EJT) for its forty years of existence. Between the two national newspapers they share the responsibility and take turns with articles such as, “At the end of the line,” “EJT: an undefeated army,” “Force for youth training,” and “Immersed in the EJT is the transformation of the Cuban economy.”

This same press hasn’t said a single work about the scandalous traffic in arms carried out by the founder (i.e. Fidel Castro) of the Military Units in Aid of Production (UMAP) and its successor, the EJT, in cahoots with his counterparts in North Korea; but that they carry on about a topic that concerns me because in one of those concentration camps they stole eight months of my life twenty years ago.

Colonel Pedro Duardo Mendez, Head of Territorial Headquarters of the Western Railway, quoted in one article, said that the EJT “was forces composed of Active Military Service (SMA) soldiers, usually with family or financial problems.” But they took me for the same reason they mobilized those in UMAP: my condition as an evangelical believer that meant I wasn’t reliable enough to be in the real army, the care and safeguard of the regime.

This same official said that the EJT recruits “have a salary that depends on their monthly production… They work in the interest of developing our country’s economy and at the same time receive a pay package for the solution of their economic problems.” But when I left the EJT I had to pay them a debt of almost 200 Cuban pesos to be released.

He said he also interviewed soldiers “recruited in places near their homes. to facilitate the work and the assistance,” but they took me 100 miles from my house and met young people in those camps who’s been brought from the easternmost areas of the country and could barely visit their homes once a year.

The journalist Eduardo Palomares in the 5 August edition of Granma (which, by the way has not dedicated a single word to the nineteenth anniversary of Maleconazo), said: “For a long time considered the country’s most productive force… they envisioned leading the way to the aspiration planned by Army General Raul Castro, in which the EJT will always be a highly efficient institution.”

And it’s undeniable, just like in the UMAP, the main objective of EJT is to make the most of young people forced to work, especially in forced labor in which it is not easy to voluntarily engage people, at least not with the paltry wages they earned.

It has to be efficient, this consortium provider of cheap labor to other companies, with the additional guarantee of total control of slaves without rights who are subjected to all kinds of abuse and harassment to perform the tasks that nobody else wants to do.

In this regard my twenty years of experience in the citrus groves of Jagüey Grand remains fresh in my mind, producing large gains for an Israeli company in dealings with the regime that served us to them on a silver platter along with our oranges.

But I know for a fact that the forced labor workers today are forced to work laying railway lines, performing specialized tasks of so-called regional companies of the Union of Railways, hard work and underpaid, done by these young people, some of whom, if they mange to finish the two years they “owe to the regime” unscathed, end up with their spines traumatized for the rest of their lives.

They end up “rallying the troops” after forcefully “squeezing them dry” in exchange for a measly cents to be investing in their own food and things which are deducted from their wages. That is our undefeated EJT.