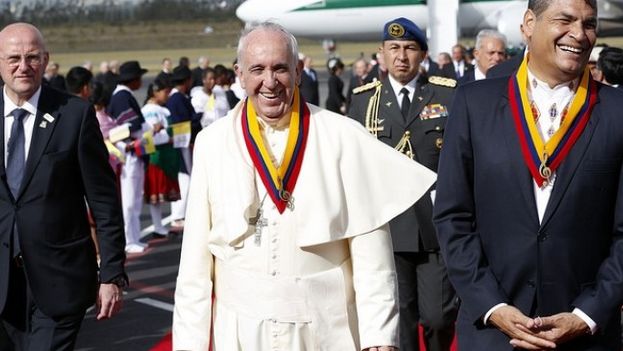 Somos+, Eliecer Avila, 15 July 2015 — The upcoming visit of Pope Francis sets the stage for a new opportunity for civil society and the political opposition to live up to the expectations of thousands of Cubans inside and outside the country, who have waited for a long time for a coherent and dignified performance by a true force for change.

On previous occasions, when we have had the opportunity to exercise political influence and make a positive impact on public opinion—mainly in front of Cubans on the island—someone has always managed to polarize the effort and portray us as divided and quarreling, unable to work together to achieve a minimum degree of strategic consensus.

Some organizations are already taking steps so their representatives will be received by the pontiff. Many of us have never understood what external criteria have been established to select those who deserve the vote of legitimacy bestowed by the handshake of universally prominent figures.

I suppose the impossibility of doing internal surveys, or of finding someplace to gauge the opinion of the people about those involved in political and civil society, forces many advisers to favor the most colorful, no matter whether positive or negative, because in any case they stand out.

This, coupled with some external efforts of those who have mastered the cunning tricks and have the contacts, results in the same sacred and impassable media ghetto.

From my point of view, the Civil Society Open Forum is an ideal place for coordinating the plural and inclusive message that Pope Francis should receive, given the high level of agreement by the principals and organizations among our ranks.

The ideal would be to choose a delegation capable of fulfilling with seriousness, elegance, refinement, and professionalism the mission of conveying the unified message of all Cubans who make up this seed of democracy, this free and independent island pulsating within the country.

Hopefully we can begin to carry out good democratic training for this and other similar situations. It is time to practice at home what we propose for the country.