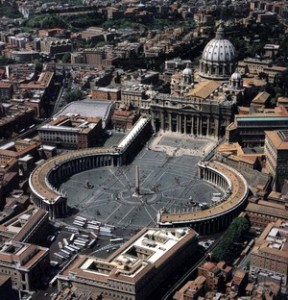 The flirtations of Castro with the Vatican are nothing new. After all, for brothers born in Biran, Holguin, 700 kilometers from Havana, in the wooden house on high pilings where they lived, God and the Bible were common in their childhood.

Their parents, Angel Castro, a descendant of Galicia, and their mother Lina Ruz, worshiped Jesus Christ. The education of the two men who have ruled the destinies of Cuba in the last 53 years had a strong Catholic influence.

So no wonder the Castro’s wink at the Vatican. It has been a formidable spin. Pure political juggling. A future strategy.

After a stormy and hostile period against the priests, Catholics and of other religions, where not a few went to jail or were imprisoned in labor camps, Fidel Castro changed his policy of confrontation. It was because of the rise to power by popular and democratic vote of Salvador Allende in Chile in 1971, that Castro was restated his strategy of gunfire toward the Vatican.

Latin America was and is the region with the greatest number of Catholics worldwide. The bearded commander realized at once that any revolution, whether through elections or armed uprising, should begin by acknowledging the role played by priests, bishops and cardinals in a new proposal for social change and advocacy of the always excluded in the hemisphere.

From the guerrilla priest Camilo Torres in Colombia, the Brazilian Bishop Helder Camara, to the theologians of the doctrine of liberation such as Leonardo Boff and Frei Betto, Castro realized that to further his dream of continental revolution he had to play with the ball of the fervent Catholicism in Latin America.

And he began to design a new ideological castling. The Fourth Congress of the Communist Party in 1991, he accepted as members believers of any denomination.

A philosophical contradiction in spades for atheists and pure Marxists. But Fidel Castro decided to look away. He knew that with the advent of democracy on the continent, the fall of the Berlin Wall and the demise of the Soviet Union, he had to change the rules.

He realized that to subvert, ideas were more important than bullets. And if these ideas were proclaimed from the pulpit by a Monsignor like Arnulfo Romero of El Salvador, so much the better. The armed struggle in Latin America had no future. The ELN and the FARC in Colombia became a bunch of terrorists and drug traffickers.

Better to reestablish a new kind of anti-imperialism, taking advantage of the opportunities for democracy, even if it is imperfect and is full of corrupt people who see power as a throne, practice nepotism and steal from the public coffers.

Precisely the wrong course of traditional parties in the hemisphere allowed the ’enlightened’ such as Hugo Chavez, Evo Morales and Rafael Correa to enter through the back door. With exotic polarized crazy speeches … wearing under his arm a proposed 21st century socialism, no one knows for sure the course one can take.

These new ’little fathers of the fatherland’ confidently combine theories of Marx, Lenin, Bolívar, the Bible and the indigenous variants such as the Pachamama. And of course, still bowing to their Cuban political manager.

After Castro was on the threshold of death in 2006, his brother, General Raul Castro, took the reins of power and further paved the way to Rome.

When the a political prisoner Orlando Zapata died on February 23, 2010, as a result of a prolonged hunger strike, and the civilized world launched a major campaign against the regime in Havana, due to excessive repression against opponents and the Ladies in White, Castro II knew immediately who to call.

And he called Cardinal Jaime Ortega. Born in Matanzas in 1936, Ortega had personally suffered ill-treatment from the olive-green government in the 1960’s, when he was confined to a labor camp.

The Cardinal would become key political chess piece for the Castro brothers. He was the partner par excellence between government, the militant Ladies in White and the Spanish Foreign Minister Miguel Angel Moratinos. The talks allowed the release of dissidents who had remained behind bars since the crackdown of March 2003.

The move brought the regime some political oxygen. Raul Castro did not move his remaining chips. The other alternative would be to sit down and talk face to face with the opposition. But in five decades, if someone has been scorned and slighted by the autocratic government of Castro, it has been internal dissent.

For various reasons, Jaime Ortega was the ideal type. Among others, for being a Catholic, desirous of a national church with a starring role in Cuban society.

To a few dissidents on the island, the Cardinal is a docile type, they say he is a puppet handled by the Creole mandarins at will. Someday we will know if Ortega is driven by the hope that the situation in Cuba will lead to a democracy, or other pressures have led him to play a role that some exiled opponents see as cowardly.

The icing on the cake in the General’s strategy is to strengthen dialogue with the Vatican. A method already used by his brother who allowed the visit of John Paul II to Cuba in January 1998.

On 26 March, Pope Benedict XVI will arrive in Santiago de Cuba, where he will honor the Virgin of Charity of Cobre, the Patroness of Cuba, to mark the 400th anniversary of her appearance. On the afternoon of March 27 he will travel to Havana. The next morning, he will offer a Mass at the Plaza of the Revolution. When he gets on the plane to Italy, relations between the Vatican and the government of Raul Castro will have been relaunched.

The Cuban regime knows that dealing with an ancient institution such as the Holy See, a specialist in managing politics like the work of a goldsmith, it will always face open or subtle criticism from analysts and the media. But they have no choice.

The Cuban population, without the devotion of other Latin American nations, began some time ago to start going back to church, without dropping the practice of syncretic cults.

The strategy of the Castro brothers is the continuation of their political legacy, but with a facelift in terms of the religious theme. For the first time, the state allowed a pilgrimage of the Virgin of Charity throughout the provinces. After 16 months and more than 28,000 kilometers and with broad participation of citizens, the pilgrimage ended last December 30 in an outdoor mass in front of the Bay of Havana.

Today, relations with the Cuban Catholic Church and the Vatican have an important place for the General and his comrades. It is in the cloisters sponsored by the Catholic Church where there are pockets of tolerance and democracy.

From a discussion with officials of the regime such as Alfredo Guevara, a moderate communist in the style of Esteban Morales, and the dissident economist Oscar Espinosa Chepe, to the lecture with open questions by the Jewish Cuban-American political scientist Arturo Lopez-Levy, professor at the University of Denver — and according to informed sources, the cousin of Luis Lopez Callejas, son-in-law and right hand of General Raul Castro.

What intrigues local observers is whether the conspiracy with the Cuban Catholic Church and the Vatican could lead to a democratic state of law. Or is just a ploy to gain time and give a wider social space to Catholicism in education and health, sectors facing hardships due to the widespread economic crisis in the nation.

To forecast the future of Cuba is like diving into a pool without water. Only that eternal conspirator Raul Castro knows what he’s doing. Although at this stage of the game, perhaps Cardinal Ortega has some clues. Let’s ask.