Fernando Damaso, 5 March 2106 — Poor taste and anti-aesthetics have spread across the whole country. Havana is an excellent example of this. None of its suburbs or districts have been able to avoid it. In Nuevo Vedado, in Tulipán Street, between Marino and Estancia Streets, an African-Cuban religious-cultural centre has been put up, made out of waste materials which, instead of embellishing the location, has made it ugly. Apart from making everybody who passes it miserable, with its profusion of flags, full-size unartistic figures, worthless paintings and aggressive and dangerous metal sheets, it also afflicts its  neighbours with music from early morning until late at night. 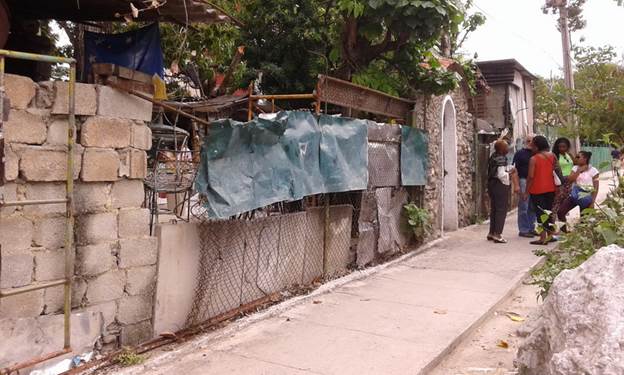 If it had belonged to any individual, the Planning Authority would have ordered its demolition by now, and would have ordered them to open up those sections of Marino and Estancia Streets, between Tulipán and Lombillo Streets to vehicular and pedestrian traffic, both of which have been closed and appropriated for its private use by the Ministries of Transport and Construction.

There is a repeat of the problem in the ramshackle facilities for the farmers’ market in Tulipán Street on the corner of Protestante, where poor taste and anti-aesthetics are also on display, made even worse by the dirty environment at that location.

It seems that urban regulations don’t apply equally to all situations, and that there are some strange “exceptions.”

*Translator’s note: Marabou is an invasive weed that has spread across much of Cuba’s agricultural land.