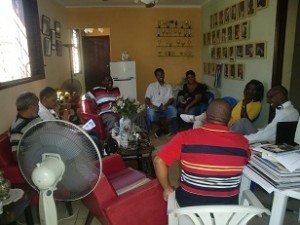 Leonardo Calvo, 84 years of age, historian and political scientist and Juan Antonio Madrazo, 42, specialist in management and food services, are now two of the most lucid and coherent voices on the map of Cuban opposition.

They are dissidents for two reasons. On the one hand, Calvo for 20 years and Madrazo for six, have desired strongly that the Castro brothers’ government enter the ring of democracy.

And on the other, they have struck up an all out battle for racial integration for the those of African origin in all social strata in Cuba. This monumental task is being carried out as if they were missionaries, educating, if possible, person by person.

‘Everything makes its way into society by education. Tackling racism in its historical context. This is our job in the Citizen’s Committee for Racial Integration (CIR). Not racism the other way around. We shouldn’t wait for the state to confront this thorny issue. If up until now they haven’t acted, in fact they’ve done the opposite, they won’t do anything in the future. This government has no answers on the topic of racism. Not politically nor culturally’, assures Leonardo Calvo.

CIR’s main headquarters is based in the house of Juan Antonio Madrazo, in the heart of central Havana, a tall black man with the voice of a radio presenter, is the national coordinator of a movement which groups together in 50s and without racial distinction activists avoiding any political preferences.

They take on the subject of racial discrimination on the island in an academic way. It’s not a problem created by Fidel Castro. No. But Castro has taken no notice of it. And today it has become a precarious Pandora’s Box.

The unfair treatment of blacks, nor their rise up the social ladder, was not abolished in 1886 when the Spanish Crown decreed that an end would be put to slavery.

Perhaps it was that very moment when fear of blacks began. Fifty-eight years of republic and fifty-three of ‘olive green’ authoritarian revolution have failed to meet the expectations of blacks and mixed race people in Cuba.

They are by no means few in number. If we go off the information of the last National Census of Population and Housing, carried out in 2002, blacks make up 10.08% of the population and those of mixed race 23.84%, we get a total of 33.92%, a figure which contrasts with the 65.05% of whites (1.02% are Asian). But many doubts about the accuracy of these statistics exist. In a hasty fashion, those of mixed race with fairer skin who shy away from their race are shown as whites in official paperwork.

It could be that blacks and mixed race make up half of the Cuban population. And it could be still more. However, in the current state of affairs, no one takes notice of them in the circles of power, nor in the high offices of economics or academia.

It is known the positions that dark-skinned Cubans hold on the island: sport, pop music, Santeria or prison. In the prisons they are the majority. Eighty-eight percent of the prison population on the island is black or mixed race.

They’re also those who live the worst. The lowest salaries and the hardest jobs. The historian Leonardo Calvo doesn’t understand why it had to be this way.

‘Since the war of independence, blacks and mixed race have fought head to head with the white population to have our independence. And the stripes have been won by a daring stroke. Whilst whites seeking independence, through their merits and knowledge, began the fight against the military, blacks had to earn their stripes battle by battle’ says Calvo.

To wield the machete in the depth of the swamp or the AK-47 in the burning African jungle the blacks have been counted on. Now is the time to share out the privileges and ministerial posts which have been kept from them.

Juan Antonia Madrazo has had personal experience of the ‘socialist racism’ practised in Cuba. There are white friends of the party who will drink a litre of rum in the early hours of the morning and treat you as a friend, but if you have a relationship with his sister racist passions are unleashed. But Juan carries on regardless.

After graduating in Food Management with high marks, Madrazo went on to run several shops. He went openly into a racist, mafia-run enclave. Where clans and corruption have come together to arm a formidable cartel which steals and buys favours to its hearts content.

‘In the working aspect I felt contempt because of my skin colour. Imagine, I’d be in charge of eight white managers and I tried to apply transparent rules. They didn’t accept my authority in any way. They did everything possible to get rid of me. Until they succeeded.’

In 2005 it was already clear to Madrazo. Fighting for respect and so that desegregation laws would be put into place was not enough, other methods had to be used. On this date he met Leonardo Calvo and Manuel Cuesta Morua (Calule) and they started to cook up the present desegregation movement which counts on the support of mixed race compatriots and blacks in exile such as Juan Benemelis and Carlos Moore.

The renowned Colombian investigator Juan de Dios Mosquera, leader of theMovimiento Cimarrón(Runaway Movement) put forward a proposal at a meeting made by the CIR on the 23rd, 24th and 25th of November, an event which developed under the difficult sieges by State Security, which detained a dozen activists and guests.

It was an act of stupidity rather than an abuse of power, think Calvo and Madrazo. ’What should have been a calm forum of debate, at a home address, turned into a news story. Before the eyes of the foreign press, as there were some Brazilian journalists from ‘La Globo’ present in my house, the repression of the political police took place in front of them and they were astonished’, added Madrazo.

The CIR’s activists, let us say Madrazo, Calvo or Calule, are of an academic bent. Their podium is not the street nor are they inclined to cries of ‘Freedom’ or ‘Down with the Castros’. They venture calm, sensible discussion on the theme of racism.

And they’re not going to get themselves arrested on any account. ’We don’t break the law, but we don’t shy away from it’, states Calvo. Next year will be a busy one for the CIR.

The year 2012 is the 100th anniversary of the uprising of the Independent Party of Color led by Evaristo Estenoz and Peter Ivonet, which provoked a violent response from the government of José Miguel Gómez, in whose high command was the son of José Martí Bazán. Three thousand blacks were lynched.

That dark spot is something to try to forget. The study of it in the history books of Cuban universities is so fleeting. And accuses those who paid with their lives for the audacity to claim a place in the political pie, of annexationism or racism.

With their writings, meetings and forums, Leonardo Calvo and Juan Antonio Madrazo replicate the thesis that since the Republican period until the Castro autocracy, the monumental crime sustained was a ‘simple stumble’ without major consequences in the history of Cuba.

So what it’s about, according to Calvo and Madrazo, is that if anything unites — above all ideology — the government of the Castro brothers and an important sector of modern Western society, it is the intellectual and biological racism toward black people.

They feel that their place is to publicly discuss these discriminatory attitudes. They want to lose the fear of black people. Time for racial integration. The real thing. Not the official discourse.