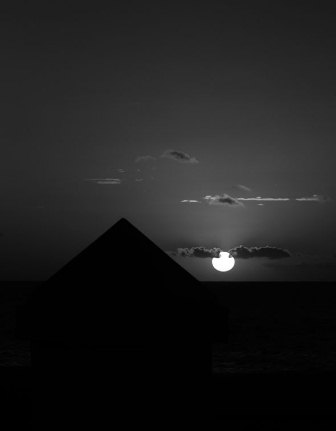 Agustín has come over to reminisce with me about his detention and the interrogation he underwent at the hands of the young instructors of Villa Marista — the headquarters of the secret police — under the mask of the “good” political police, “open to dialog,” “in disagreement with the higher ups,” ignorant of the Universal Declaration of Human Rights.”

Agustín is a man of God. His treasures are the earth and the sea. Now we are in love I understand him better and I live fascinated in his light. I like to see him walk barefoot on the earth, telling me stories of guajiros. He just longs for a boat to sail again, without caring who it belongs to, abandoning himself to the rolling of the waves.

Even though I don’t know the attitude most appropriate to the circumstances of being taking by force to engage in a dialog without third parties, without witnesses, with those who know us not as adversaries, nor worthy, nor honorable, my love has led me to admire him once more when he had told me it didn’t bother him to have been recorded and later edited, nor even to have been taken by force.

Near-sighted as a mule, seeing in his eyes only the face of the deep, Agustín has tried to see his captors with the dignity of a Christian who wants to continue to recognize Christ in all things. He has reminded me of a text of Lezama’s that I like very much. And he has made me think than there can be a kind of “envy of fraternal grace” — as well as the fear they have that we will discover the whole deception — created by the tyrants and their henchmen persecute us in vain, because we have to escape and, in the end, if the time comes that only God knows, conquer them.

Allow me to transcribe a small piece. I hope instead of tiring my readers you will like, “Treaties in Havana.”

“Man envies man, his neighbor. Whether he is a dervish, who has renounced everything, or married to the spellbound Caliph’s daughter, he can taste the mandate of each day and the spiritual voluptuousness of every moon on his silver plate.

If the envied one flees, sensitively shocked that he hopes to provoke a resonance in the inflexible envious one, he irritates even St. Vitus and the fainting, but he senses evil that in this flight the envied takes on superhuman attractions and ceding the field, in the end, the envied adds towers and bears to his shield.

But the envious one plans with foxy visibility; crafty, intertwining cords and will, to receive the same linearity of effort. He watches his conduct and despairs that no one falls unwittingly into his entrails. He says, ’I am good — like the goodness dancing in the mirror — however, my back is struck by canes and trouble.’

As he says this, he sees ’I am good” jumping off the chairs, tying off the sheet. He notices, and his malignancy opens doors when the wisdom blocks off successive surprises, that his neighbor is caring for something he doesn’t know, for a power that exceeds the vain confidence of his combinations, he falls into their ambushes; into traps, that exhaust him, they show that the mystery of man no longer flows through his bloody channels.

“The envious distrust that he will be found, he cannot achieve the suspension of his conduct, he wants to provoke surprise. His curtness comes from lack of confidence that this is the dwelling place of a miracle. He wants to mix his will with the incomprehensible protection of the divinity. It lacks resonance for him that only in obedience is there mystery, rebellion, creation. He perceives in Dostoevsky’s hovel or in the distance where Marti lives, punishments, hostile deities. ’When I feel weakest, says St. Paul, I am strong.’ for those weak beings, in the most essential dimension, are marvelously protected.”