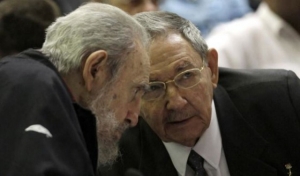 The 33 presidents and dignitaries who visited Havana were left in awe. None knew how, albeit very precariously, with the buildings in ruins and on the edge of catastrophe, Cuba managed to sustain itself. Perhaps with the exception of Venezuela’s president Nicolas Maduro, who has second sight and an ongoing dialogue with birds, who keep him fully informed.

None was unaware that the two-hundred-year-old sugar industry had been liquidated and scrapped by the fierce incapacity of the leadership. Everyone knew that the tobacco and rum trademarks were sold to European multinationals long ago. It was clear that the fishing fleet hadn’t existed since the nineties. However, the Island, managing to scrape by, imported 80% of everything society needed, including food, medicine and a substantial part of the energy.

How did they do it? Where’s the catch? Where did the money come from?

I heard it for the first time from a European diplomat who had lived in Cuba. Later it was popularized. The model created by the Castros is the State as Pimp. Pimping is a criminal behavior that consists of obtaining benefits from another person who is forced to work through coercion or the promise of protection. Generally it applies to prostitution, but not only. It is also known colloquially as “chulería.”

It’s an awkward name, but in sync with the reality the circulates in whispers between Cubans on the Island. The government has specialized in extorting its own citizens or allies, to whom it offers services of espionage and social control, its only two specialties or “comparative advantages,” as economic jargon would have it. Fifty-five years after the establishment of the dictatorship, almost all the significant sources of income that sustain the country come from murky businesses conducted abroad.

The Venezuelan subsidy: Calculated at 13 billion dollars a year by Professor Carmelo Mesa-Lago, dean of Cuban economists in this area. This includes more than 100,000 barrels of oil a day, of which half is re-exported and sold in Spain. Another 30,000 apparently go to Petro Caribe, giving rise to a double corruption of political support and illicit enrichment.

The public source of this information is the expert Pedro Mantellini, one of the great authorities on the issue of Venezuelan oil. He explained it to Maria Elvira Salazar on her program in Miami on CNN Latino. Caracas buys international influence based on oil, but shares with its Cuban accomplices the management of these gifts. Cuba, after all, is the metropolis.

Trafficking in doctors and healthcare personnel: This brings in 7.5 billion annually. The specialist Maria Werlau, director of the Cuba Archive project, has described the activity in the Miami Herald. The Cuban government leases out its healthcare professionals and charges for them. It confiscates 95% of the salaries of those under its “protection.” Angola pays up to 60,000 dollars a year for each physician.

Not even the aid to Haiti escapes this scheme of “solidarity at a price.” The services provided in this devastated country earned Havana a good price from international organizations.

Brazil, which pays for many services, is the final major partner of Cuba in this murky activity of international healthcare pimping. President Dilma Rousseff doesn’t want to benefit her poor so much as her Cuban friends. Raul, in addition, has a great mastery of the craft. It’s a practice well-known to Cuban slaves since the 19th century.

As long as slavery lasted (until 1886) the masters rented out their slaves when they didn’t need them. The most profitable part of the business of “renting blacks” was the poor girls who were delivered to the bordellos. Their masters charged for the services they provided. They were entrepreneur-pimps. Now, simply, we have a state-pimp.

Other rentals, other businesses: But the exploitation doesn’t end here. The Cuban government rents other professionals to private companies. The ancient Greeks referred to slaves as “tools that speak.” I don’t think Raul knows the classics, but he understands perfectly the ultimate meaning of the expression.

There are Latin American or Portuguese speaking universities who contract with the Cuban government for the services of good mathematics or physics professors at bargain prices. There are nightclubs and cabarets who contract with musicians, or theaters who hire Cuban dancers, including Alicia Alonso’s magnificent ballet.

There are European and Latin American companies that exploit computer technicians from the Island. The Castro regime knows that a well-educated Cuban is completely wasted inside Cuba, given the insane economic system of the Island, but he or she is a potential source of riches once placed abroad. Objectively, this government is a gigantic and implacable labor subcontracting company that violates all the norms of the International Labor Organization (ILO). This is its livelihood.

Remittances from exiles: Emilio Morales, the great expert on the subject who escaped from Cuba relatively recently, places this source of income (in 2012) at something more than 5 billion dollars. Half, roughly, is remitted in cash and the rest in merchandise. It is growing at an annual rate of 13%. Every time a rafter escapes, the regime, paying lip service, moans over the flight, but knows that in a little while the dollars will flow to a needy family left on the Island. In Cuba, although it was with crumbs, the regime had to feed him. Once in exile, he’s a free and constant source of income.

This is where the money comes from to pay for the imports. How long can Raul Castro sustain an almost totally unproductive society through activities that approach or directly involve a crime? Who knows. Pimps usually have a long life. There are many people who are served by them, and who through their intermediation access various forms of pleasure, including the enjoyment of power.

Carlos Alberto Montaner is one of the most read journalists in the Hispanic world. Poder magazine calculates that six million people read his columns and articles weekly. This post has been translated from DiariodeCuba.com, with permission from the author.