Supreme Court ratifies the sentence against the writer Angel Santiesteban

The writer Angel Santiesteban is waiting for the call to serve his sentence in prison. 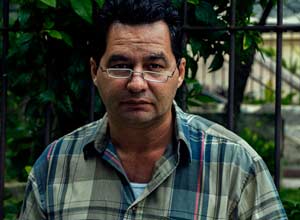 About to go to prison with a five-year sentence, the writer Angel Santiesteban says his only regret is not having taken off the mask he was forced to wear to live in Cuba much earlier.

“At the gates of the prison, I feel that I won the game, because if a government has had to cheat to silence my voice and send me to prison thinking they are going to silence me it is proof of their defeat.” Santiesteban said in a telephone interview with CaféFuerte.

On Monday the Supreme Court dismissed the writer’s appeal and upheld the five-year sentence handed down by the Havana Provincial Court December 6. The writer had appealed the sentence to the highest court in the land at the end of December.

“It was a hasty decisions, usually this process takes three months, but with me it didn’t take a month,” Santiesteban said. “Right now I’m waiting for them to send me to prison at any time.”

He added that he is prepared to “take this injustice with dignity.”

“I will go to jail with my head held high and only my death can silence me,” he said. “The only thing I regret is not having taken off the mask long before.”

Santiesteban, 46, was sentenced on charges of housebreaking and injuries. The writer believes that the accusation was fabricated and manipulated for political reasons. His problems increased after he started publishing his blog, The Children Nobody Wanted, strongly criticizing the reality of the island. His posture immediately sentenced him to official censorship and ostracism.

“I knew that as long as this government exists I would never publish again, they would never allow me to present a book by another author … I am completely out of the intellectual reality of this country,” he said. “This has totally changed my life, but really I have my conscience, he could not continue the charade and simulation.”

The novelist and storyteller of recognized work was awarded the Casa de las Americas in 2006, and the judicial prosecution of Santiesteban judicial has generated a widespread international campaign on his behalf.

Santiesteban criticized the silence of Cuban intellectuals who were colleagues and friends of his years ago, and who now avoid giving him public support.

“Here you write and you eat, and whoever thinks differently’ shuts up. I have talked to with many intellectuals who, when they tell me what they think, are stronger opponents than I am and yet, you see them on television waving the wand, supporting the system… The role of intellectuals in Cuba is terrible, in the face of history their position is shameful.”

As of last week a video has circulated in the Internet with a testimony of a neighbor of Santiesteban belying the official version that the prosecutor presented at the trial, held this last October. In the video, Alexis Quintana Kindelan confesses that the writer’s ex-wife tried to use him to throw blame on the writer for a fire in the family home and fabricated the cause.

Finally, the prosecution dispensed with Quintana as a witness, but maintained the allegations of the ex-wife to ask for the sentence. Santiesteban was divorced from the mother of his son for more than two years.

“The police pressured this man, a mentally retarded offender, blackmailing and bribing him, promising him clothing and even that he would be allowed to leave the country,” said Santiesteban. “He lied and also accuses me, the lie they asked him to give as false testimony.”

However, the accusation of the ex-wife was maintained and tipped the scales against him.

“Obviously it is a typical case of the perjury … If the prosecutor’s supposed witness says that the person accused me was pressured, they should have closed the case, but it is clear that this was a political trial.”

Days after the conclusion of the trial, Santiesteban was beaten and detained while protesting in front of a police station about the arrest of a group of human rights activists. In the operation he received a beating that caused injury to his ribs.

After his release, Nov. 11, he published a telling testimony about the details of his violent arrest and released on the internet a photo of the shirt he was wearing, covered in blood.

“What I did, I would now do harder, with more intensity. I want freedom for my country and when I started my blog it was published out of a need to feel that my heart was feeling freedom in Cuba,” said Santiesteban.