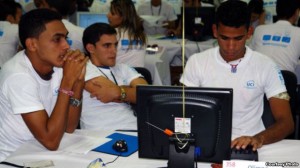 HAVANA, Cuba, November 12, 2013, Veizant Boloy / www.cubanet.org.- On November 4, at 10:30 PM, at the University of Information Sciences (UCI), located in the capital municipality of La Lisa, a group of more than several people, armed with a knife, threatened and beat a student, determined to take his laptop, according to information from workers there.

“A friend who was with the student at the time, had to give his cell phone to the criminals, in the face of their threats,” they said.

“They threw one of the guards on shift to the ground and were arguing with each other whether or not to kill him threatening him with a gun,” said a nurse who asked not to be identified. “Eventually they let him live,” she added.

Also, in UCI complex 1, a robber threatened a 4th year student of the faculty, named Manuel Ruiz Aguilera, a native of Marianao. He sustained injuries for not giving up his laptop and is recovering favorably.

There was a police operation, involving senior managers of the UCI and the Chief of the guards.

They managed to catch 8 suspects, in El Cano, a nearby neighborhood, which were located through a telephone call to the phone they had stolen. These citizens were armed and two of them wore shirts that said “UCI.” They had taken some laptops but the exact number could not be specified by any source.

According to some statements made by workers and neighbors of the place, the UCI is the target of numerous and constant thefts because of security weaknesses.

As a result, they’ve gone back to posting policemen to guard the surrounding area and promised that they will fence the perimeter.

In June last year, a theft of equipment theft occurred in the same place .