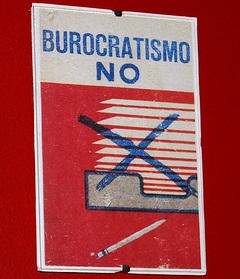 It’s a war of power against power. On one side, General Raúl Castro manages military counter-intelligence, pulls the strings in the major economic sectors of the nation and has consolidated his cabinet with loyalists as bullet proof as atomic bombs.

But behind the scenes, his adversaries look at him sideways. They are high-flying bureaucrats, local business managers, heads of large wholesale storehouses for food, textile and electronics waste, construction materials, and managers of tourist facilities.

This fat layer of bureaucrats has dedicated itself to creating a dense network of diversion and theft at the expense of state resources. They have created a parallel economy.

For many years, the envelopes with thick wads of cash and all types of gifts have landed happily in the pockets of certain senior party officials and dishonest government employees. The local bureaucracy has taken root in the bone marrow at almost all levels of society.

Like the marabú weed, it will be difficult for Raúl Castro to cut them off at the root. They are enemy number one. Forget about internal dissent; for the moment, it doesn’t count. It’s a fight against the demons that provoke these systems of command and control and the military economy.

There are tangible indications that at the first sign of change, the true opponents of Castro II will go on strike to pull the floor out from under him in order to slow the economic reforms.

See for yourself. According to the official press, in August the production of beans tripled over the past six months: 90,000 tons. This is no small thing. That figure is the amount of grain that is consumed annually on the island.

However, despite the high cost of black and red beans, which are sold in private markets at 12 and 15 pesos a pound (half-kilo), only 9% were for sale. The rest was bogged down in the warehouses.

Or they were distributed by the usual clandestine channels that permeate life in Cuba. And that work like a Swiss watch. It happens that beans are sold in the state market at 8 pesos.

The corrupt bureaucrats who control the supply chain prefer to hold onto them and sell them out the back door, to supply the black market or the private agro-markets. So they always have beans.

The marketing network is an unresovled matter for the Ministry of Agriculture. Tons of bananas, fruit or tomatoes rot after harvest, for lack of packaging or means of transport.

This leaves the door open to the czars and clans who control the food supply. Who for years have made money thanks to the inefficiency of the Ministry of Agriculture. To this add the absurd policies of the government, which stipulates that 80% of the agricultural production of private farmers must be sold to the state.

At laughable prices. So private farmers must cheat to keep more of their crop. Or they let their cattle and oxen graze on railroad tracks or the highway, to be killed by “accident.”

Cuban farmers own the livestock, but they cannot market or sell the meat. Only the state is allowed to do that.

The pricing policy is irritating. A kilo of onions costs one peso and 30 cents in the store. With one peso in Cuba you can only buy a newspaper, take a city bus, or get a cup of coffee.

Now many farmers steal from their own production. To sell in markets governed by supply and demand. There a pound of onions sells for 10 pesos.

It’s precisely in the collection centers, refrigerated storage and warehouses where the cartels and mafias operate at full throttle, enriching themselves and profiting from the food supply.

Right now Raúl Castro is someone they can’t stand, someone who is going to fuck up their business dealings. The only thing left is to fight him.

They use devious strategies. They don’t show their true feelings. Nor do they publicly complain about the government and its policies. They are kings of pretense. They know how to pull the strings.

To create obstacles they have a panoply of excuses. From lack of oil, transport, spare parts or a shortage of workers. They know how the system works better than anyone; they have lived off it for years.

The same thing is happening with construction materials. According to the official media, industry warehouses are over-stocked with cement, slabs, floor tiles and toilets.

However, despite being sold without subsidies in the municipal markets, people who try to repair or build a house always get “No” for an answer when they ask for certain materials.

Only low-quality materials are for sale. Or something else that is so expensive that many prefer to buy it on the black market or with hard currency, for a better rate. Remember that 60% of homes in Cuba are technically in fair or poor condition.

Therefore, construction materials are in demand and urgently needed to prevent roof collapses. General Raúl Castro wants the street stalls and agricultural markets to be saturated with products. So families can have a glass of milk.

And for the disappearance of so many absurd regulations for traveling or buying a car or a house. But his wishes and reforms go cautiously forward at a turtle’s pace.

As an adversary, he has a monolithic wall of corrupt people and bureaucrats who have joined ranks. There are two options: Either he will demolish them, or they will demolish him.