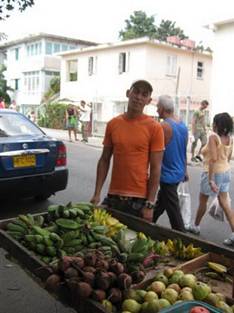 Lately, I have been taking the pulse of the street by wandering around various produce markets which have been set up since new guidelines governing commercial activity went into effect. Though they are generally well-stocked and offer a wide selection of goods, they all share a common denominator: high prices. This puts them out of reach of most workers and results in very poor sales. Perhaps prices remain high at the same time there is a wide variety of goods for sale and a possible increase in production. In the current climate customers buy only what they need to survive, so demand is not outstripping the supply, resulting in a decline in quality with the passage of time but without a subsequent decrease in prices.

We see the same situation being repeated in the case of pushcart vendors. A widespread  phenomenon that has sprung up spontaneously involves unlicensed street vendors, who operate near the entrances of some markets. Typically each vendor sells a different product  (onions, garlic, razor blades, fluorescent bulbs, powdered milk, etc.) and stands ready to disappear at the first sign of inspectors or other government agents.

Another notable development has been the closure by authorities of some private businesses such as family-run restaurants, cafes and  sweet shops, which had been operating for some time but which were accused of illegal activities such as buying supplies on the black market or having more employees than is allowable. Others have been shut down for poor sanitary conditions. These developments, along with the previous closure of private in-home 3D movie theaters, have darkened the mood in the neighborhoods, which seem to be waking up from their long, paralytic lethargy and questioning the so-called economic “updating.”

Given the way things work, however, we have already seen the beginning of the propaganda campaign leading to the upcoming May 1 commemoration, in which “all Cuba will shake from workers marching,” none of them with grievances and happy as always with their prosperous and sustainable socialist present and future.