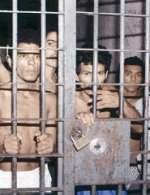 Not a week goes by that we don’t receive a phone call from some Cuban prison to denounce physical abuses, denial of visits, lack of medical care and other outrages. The vast majority are common prisoners, men and women, many of whom say they have been politicized in prison. The majority consider themselves totally innocent of the charges that sent them to prison, others accept their responsibility for the imputed events but feel they’ve received a disproportionate sentence.

It’s almost impossible to verify these complaints and this desire for objectivity from which we suffer keeps us from talking about every case. Our greatest treasure is the credibility we’ve achieved among our readers, but every call provokes a dilemma that makes us see ourselves as egotists or cowards, after listening to a Cuban behind bars spell his name–so we will get it right–and state the name and rank of the boss of his prison, the person who denies him medications, suspends his visits, or sends him to the punishment cell.

However serious the crime committed, no citizen should be helpless against the abuses of power. Whose duty is it to protect their rights?