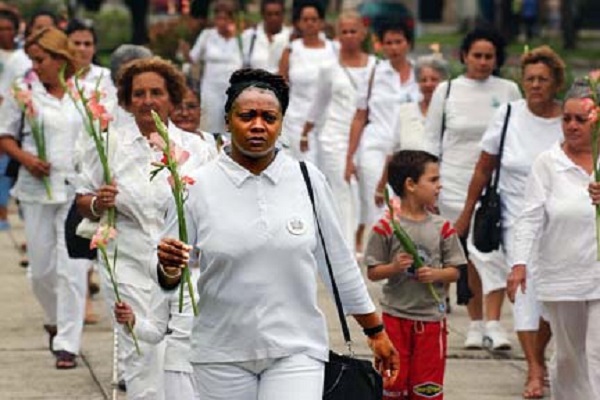 Cubanet, Ernesto García Díaz, Havana, 19 February 2015 — On the morning of Saturday, February 14, in the town of Colón, Matanzas, CubaNet visited with Caridad María Burunate Gómez, a member of the Ladies in White.

To learn more about this dissident who is also a member of the clandestine Pedro Luis Boitel Party for Democracy (PDPLB), we asked her in what year she joined the Ladies In White movement.

She replied, “I started in the Ladies in White of Colón in 2005. I was in touch with other Ladies, but here I began as a volunteer with my sister-in-arms, María Teresa Castellano. We went on foot, dressed in white, to the church, and from the parish to my home. I belonged to the PDPLB, which is presided over by my compatriot Feliz Navarro Rodríguez, who supported us and they are our protectors every time we march on Sundays.”

CubaNet:  How did the Ladies in White movement in Colón grow?

Burunate:  Well, a group of women opponents from the municipalities of Los Arabos, Perico, Calimete and Jovellanos, who were also Ladies in White, began to join us. We were more than a dozen and we have continued going out every Sunday. We walk two-by-two in silence. We are organized, in spite of the pressure we receive from State Security.

Burunate:   What can I tell you, they provide an important escort, to protect us from being beaten. About 20 of them would come out when we were being heavily repressed — now there are fewer of them, because the repression has let up. During the phase in which State Security would surround my house, (the PDPLB members) would come from Perico, Jovellanos and Los Arabos — many would even be there already by Friday — and they would join us in the street. It was a way to avoid us being detained. The bond among us is great.

We have been beaten very much. Ivan Hernández Carrillo, Félix Navarro Rodríguez, Francisco Rangel, they were all beaten. Senén was knocked out with a two-by-four, I was slapped, my sister got a huge bruise in the stomach. One official known as Col. Joaquín of Section 21 ransacked my house. Lázaro Díaz was beaten on the head so hard the blood was gushing out. They would be taken to other provinces and dropped off, with no concern for the safety for their lives.

CubaNet:  Do you enjoy the support of the people?

Burunate:  The people speak very well of us. When we were the targets of repudiation rallies, we would be beaten, and the people did not approve of this. Folks know that we do not interfere with anyone, we do not scream orders, we walk silently, with a flower in our hand, and our silence seems to resound with a great voice that proclaims, “Freedom for political prisoners and freedom for Cuba.”

CubaNet:  2014 was a year of much repression against your group. How is that situation now?

Burunate:  They threw eggs at us, they tarred our houses, they used prisoners to fling pig excrement at us, they would call us mercenaries, worms, but we were able to discredit various local government leaders as corrupt.

It was the townspeople themselves who would tell us who was corrupt. We began to report on Bequer; on Dignora Senea Sotolongo who is president of the local government, who made shady deals on some houses, who receives monies from abroad while proclaiming “Fatherland or Death.” The acts of repudiation began to diminish. Now they only watch us.

CubaNet:  How has State Security behaved since the December 17 announcement?

Burunate:   The State Security officers Orlando Figueroa, Ravelo and Irbis, have told us that they will not interfere with us anymore, that we should go out in a group, not two-by-two in line. But we did not accept this. On Sunday, December 21, they took us to the police station, but on subsequent Sundays they have not bothered us again.

Our profile has not diminished, while that of Security has been restructured: now they make their attacks individually.

CubaNet:  What do you hope from the reestablishment of relations between the governments of the United States and Cuba?

They say we do not have a platform — well, of course not, they deny us the right to have one. They say we are mercenaries, that we do not have convening power, nor a project — a plan — for the people; well, no, being that when we go out, they follow us, they apprehend us, they do not let us do anything. They are blackmailers.

Let them allow us to move freely, let them legalize us — then this government of the few who claim to speak for the many will not last a moment. The people themselves will throw them out.

Felipe Marrero Manes, known as “Merejo,” is Caridad Maria’s husband. He says, “I have supported my wife in everything. We have been married for 26 years. Our daughters Yelena and Yisable have grown up being harassed and pushed around by State Security. The older one was detained and beaten. The regime cut short their academic progress. A (Masonic) lodge brother of mine warned me that we should take care of our daughters, that they would not be able to go to school. It is love that nourishes our marriage and keeps us strong for the fight.”

Finally, CubaNet asked Caridad Maria, “Do you want to communicate any message to those who might read this interview in and outside of Cuba”?