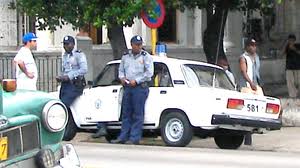 Gabriel got up in the morning. He was shocked to find that when going to shower water was not coming through the rusty pipes of his modest home. It seemed to him that something wasn’t right. He went out onto the patio and followed the course of the piping until he saw the cut in the adjoining house.

His neighbor, with whom he had legal problems about the patio boundaries, had cut the pipe. He stated that he was within his rights to do so. Gabriel went early on to the nearest police station with the aim of reporting his neighbor. There the torturous process began.

Upon arriving, a mother was making a fuss because she didn’t know to which police station her detained son had been moved to. After a while the police, neither willing nor able to give her an answer, took her to an office. Once they were away from the civilians present, they began to give support to the exasperated woman.

By then it was eleven in the morning. The plan to get to work for the evening shift had disintegrated. “I got out of the chair, thinking that the official in charge of the case had forgotten about me. The official hardly raised his eyes from his papers and told me to wait,” Gabriel remarked.

There he stayed seated for three hours, though it almost seemed like centuries. Then came his turn. The young official started to prepare the criminal complaint form when he suspended the act and left the office. Impatient with the delay, Gabriel went over to the file once more. Behind his desk the agent looked up the crime in the Penal Code that the claim could be based on.

The reporting party suggested a crime category: arbitrary exercise of rights. The policeman, offended, claimed he would not file a report because there had been no crime. Unsatisfied, the reporting party asked to speak with his superior. After much insistence he succeeded in filing the complaint. Gabriel returned home exhausted, disappointed, and in a bad mood.

Stories like this are told more often than one would like. As a result, when people are victims of a crime, instead of filing a report they say to themselves with certainty, “Why bother? I’d just lose the whole day doing it and nothing would get resolved.” So says Caridad, victim of a robbery at her house a year ago. Her items have not been recovered.

This rude behavior violates the penal legislation in force regarding criminal complaint filing procedure and the behavior of the police when they have knowledge of a crime. The lack of human sensitivity of the uniformed officers and their poor judicial training stand in the way on the road to justice. Thus, more and more each day, the public loses confidence in the authorities.