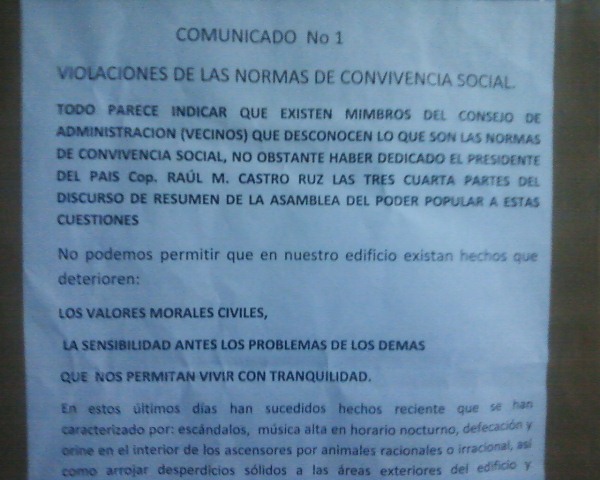 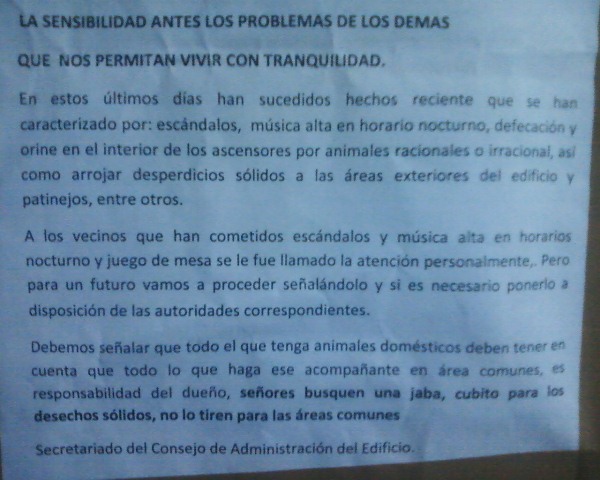 Violations of the Rules of Social Coexistence.

Everything seems to indicate that there are members of the administrative council (neighbors) who don’t know the rules of social coexistence, even though the president of the country, Cop. Raul M. Castro Ruz [dedicated] three-quarters of his speech before the National Assembly of People’s Power to these questions.

We cannot allow these things to deteriorate in our building:

Sensitivity to the problems of others

That allow us to live in peace.

Lately recent events have occured characterized by: scandals, loud music at night, defecation and urine in the elevators by rational or irrational animals, as well as throwing solid waste in the areas outside the building and patios, among others.

To the neighbors who have committed scandals and loud music at night and playing board games, you were personally notified. But for the future we will proceed to take notice and if necessary pass the information to the corresponding authorities.

Secretariat of the Administrative Council of the Building

This notice, which I thought it was unusual, was stuck and stuck again on the walls, the front door and the door to the parking of my building. I live at 702 Lombillo Street. My friends who come to visit me have always found it a little crazy — a little eighties-ish — the way the Committee for the Defense of the Revolution (CDR) has stuck propaganda on the walls. The new signs were put up by the CDR after that speech by the general-president where he called the people scoundrels, he who has been holding the yoke imposed by his family for over five decades, almost without protest.

In the first paragraph there is a gap, a dynamited bridge, between the fact that the neighbors don’t know the rules of coexistence and still haven’t learned them,  even when the general explained to everyone how to live together nicely.

As if presidential opinion was the beginning of havng a conscience. As if we didn’t have a conscience. But in Cuba the people can not understand their responsibilities when they have never tasted what it means to have rights. Rights against the government, which here has been sold as something sacred, unquestionable, supported by the international left. And turned into an ideology, where conscience is drifting, scared, powerless. 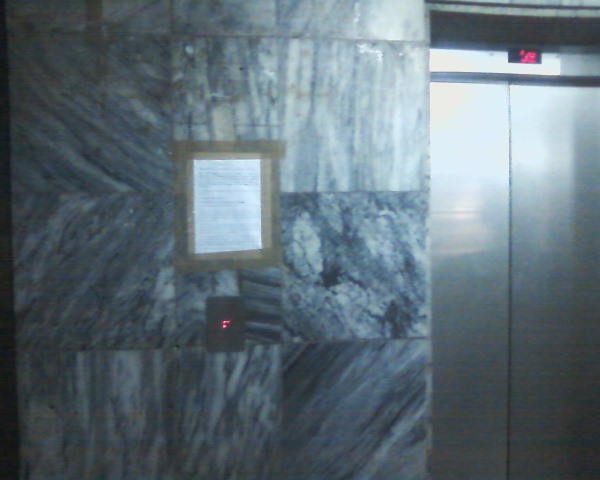 If we look closely there is a moment where it says it’s unknown whether the urine in the elevator is the work of rational animals.

It’s not clear to me if it’s a joke, in a communication that displays so much indignation and that has been written, obviously, by someone who has felt satisfied with the definition of “species in danger of extinction,” as the expresident of the Island — who ruled from 1959 — has called humanity.
A tyrannosaurus rex, no doubt. Doomed to extinction.

And the way it is worded it seems like some idiot making jokes in bad taste. However, all is true.

Here we see the end result of this experiment. And the notices are still appearing. I intend to attach photos of them all. 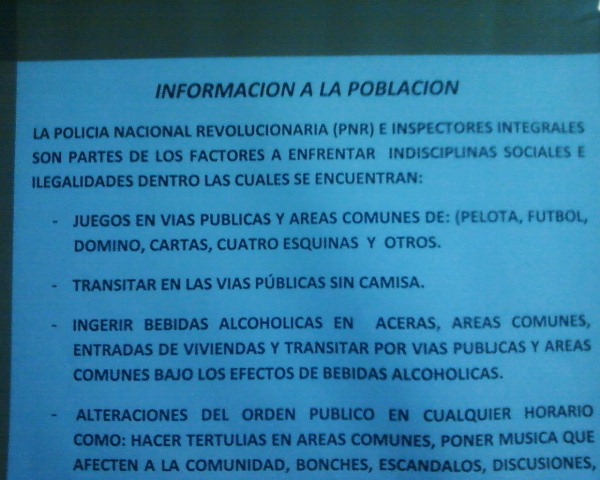 INFORMATION TO THE PEOPLE

The National Revolutionary Police (PNR) and Member Inspectors are part of the factors confronting social indiscipline and illegalities which include:

– Walking on public streets without a shirt.

– Drinking alcoholic beverages on sidewalks, common areas, housing entrances, and walking on public streets and common areas under the effect of alcohol.

– Alterations to the public order at any hour like: discussions in common areas, playing music that affects the community, groups, scandals, discussions,