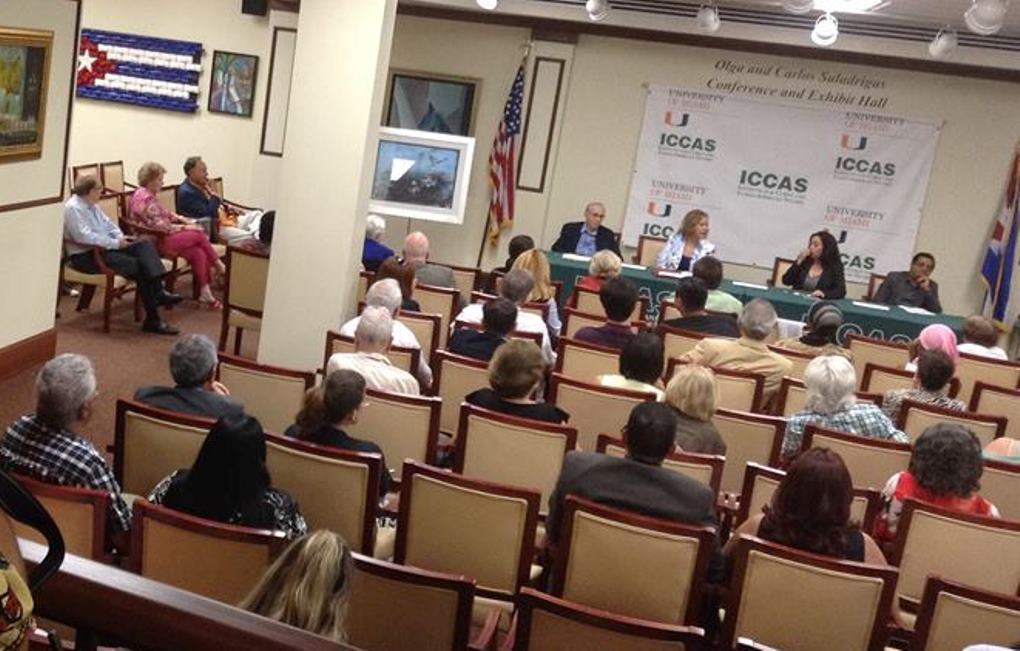 On the evening of June 5th, I had the opportunity of presenting Janisset Rivero’s book “Testigos de la noche”  (“Witnesses of the Night”) (Ultramar 2014).  Casa Bacardi opened its doors so as to let us share this lady’s work along with the poet Angel Cuadra. Rivero read entries from her wonderful book of poems. These are the words I wrote for the occasion:

Poetry books always bring me new hope. After time spent reading poetry that leaves me cold, there are poets who emerge to refresh my thoughts and point the way to understanding the mysteries of universal poetry.

Janisset Rivero has written a book that continues the narrow hereditary line of verse in Spanish, that line which unhealthy experimentations and abuses of the language have tried to erase by force. Simple versification, without needless displays and literary artifice, is perhaps the best decision, an expression of talent and the force of poetry macerated by eyes that see above the crudest reality.

“The shadows lift themselves/ from the same path/ where once was born/ that rare flower; / and the wind breaks through to cut/ the voice of some history.”

There is a flavor here of Machado, a thread connecting us to Paul Eluard, but it is La Avellaneda and Gabriela Mistral who season the bundle of words with which “Testigos de la noche” shows us Janisset, while the publisher Ultramar takes a mature step on its path of promoting literature. We see here a book that stands out through its modesty and economy of resources, both achievements boding well for the poetic profession as well as that other dying star, the readers of poetry, who upon entering the 21st century are seen as odd creatures.

An old poem is a new poem

Would that nothing human were foreign to us. It is like a canticle, a voice emerging from the deep thoughts of someone wiser than we. Nothing human is foreign to me, responding to that poetic subject that Janisset Rivero utilizes to traverse that broad plain that is Testigos.

The expression of love, desperation and fear of death surrounds us since the dawn of the world. Articulated anew by the momentum of Janisset Rivero’s verses, the realization of these timeless themes seems renewed: “The cry of the night/ charges the word/ and later silences…” Thus says one of her perhaps most accomplished compositions. But, is it death? Is it life? Is it the flowering of the fears of all times? We don’t know – Janisset Rivero leaves nothing assumed, and thus we witness another example of how insinuation is perhaps the surest shot.

Contemporaries as we are, we now face the dilemma that all that we poets touch has been touched by others, but the intimism revived in this work becomes addictive and pleasurable. To again read poems of love, hatred, human fears (which by virtue of being human we have all had them), is a good enjoyed by the most cultured.

No one tires of reading letters, messages, cries. No one – human as he may be – can simply walk by the weeping or the smiling rain of a woman. And we have here, readers and listeners, attentive to that voice that has emerged from JR to insert itself as a matter of course, in the skin of the poetic subject that she has utilized to narrate the ancient canticle of her work.

This, is it a new book or an old one? We, are we new or old readers of poetry? I believe that two words, two concepts have brought us together on this night of celebration: friendship and love. JR treats both with the same intensity – “Testigos” shows it. 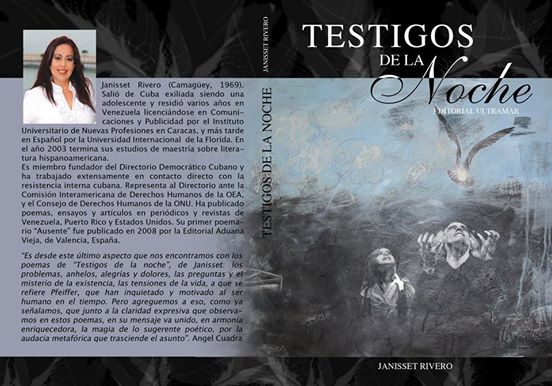 I do not believe in literary compromises. Somebody said that we writers are gravediggers by birth. We kill a writer to ride his glory, we bury an author because we want to throw off his powerful influence. For this reason, the mentions that JR makes here of her compatriots, of her brethren who have preceded us in death and of the glory of their heroic achievements, are a natural act of gratitude, and not an archetypal “compromise”. At least that is how I have read it and her, and this convinces me more than any instruction or qualification made on the surface, or under pressure.

Why were there not appearing here the shadows or the lights of (Pedro Luis) Boitel or Orlando Zapata Tamayo? “Redeemed at last/ in battle./ They fear still…/ and you shine, Pedro/” … and I would add, OZT, Antonio Maceo, Virgilio Campaneria, Marti, Eusebio Penalver, Zoila Aguia, The Girl (the lovely girl, I would say) of Placetas. The verses in “Testigos…” are not accusations. They are tollings of a bell to remember, they are antidotes to apathy and greetings of a new time that is today and not tomorrow. This manner of greeting without weeping, of remembering without the frigid and obligatory applause, renew a poetry that refuses elegies. The verses of JR are a flower-word-wind, a herald, and for that, poetry is ever grateful.

JR chose the difficult path of touching her dead without placing a banner at the door to the house. This is a happy thing, because it makes her intimate as well as plura; it makes us participants in all that she touches, in all to which she invites us, on this night, and tomorrow. 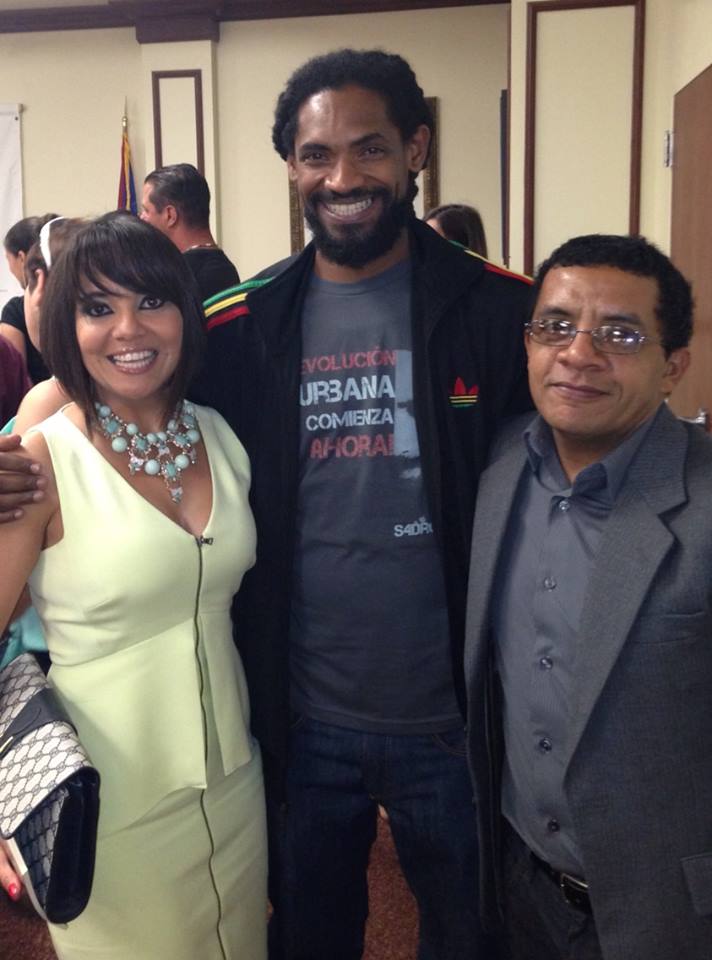 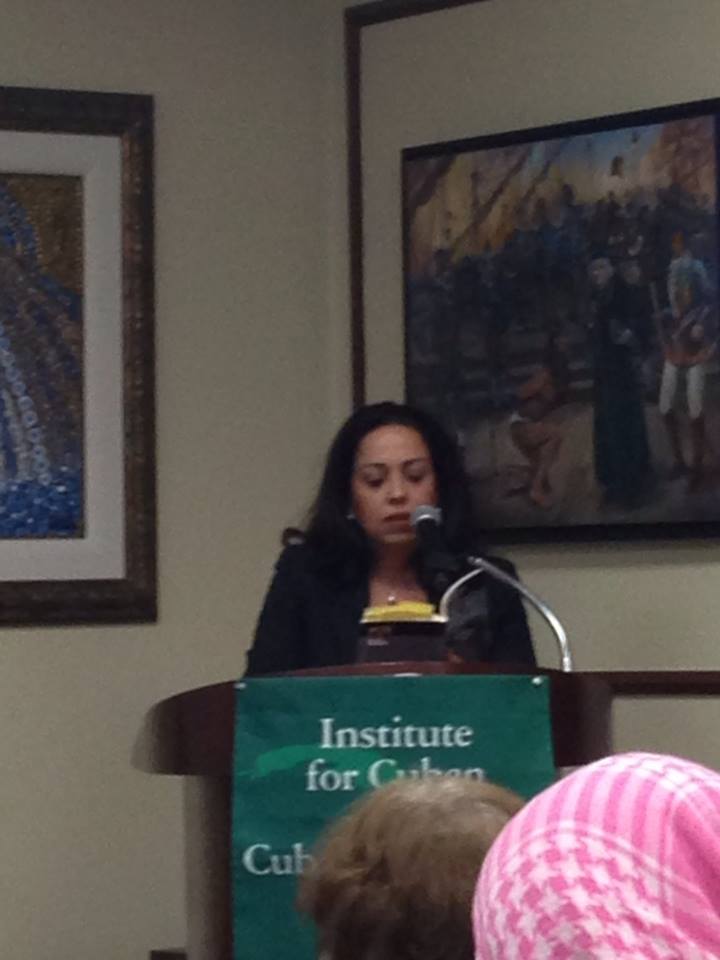 Janisset reads portions of her work.