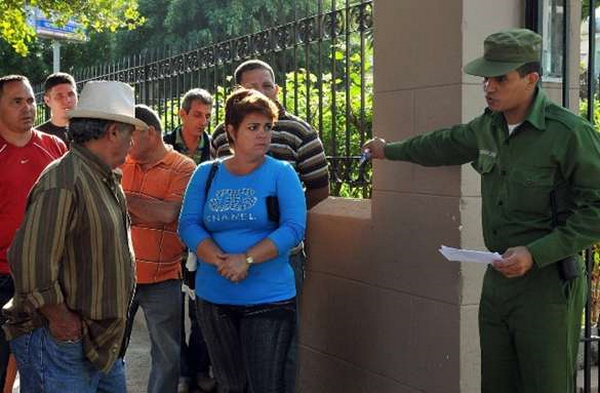 On Monday, January 31, the Havana Provincial Court imposed sentences of between 5 and 15 years imprisonment on the 13 people accused in the deaths, by starvation and cold, of 26 patients in the Psychiatric Hospital, located on the outskirts of the capital. The incident occurred in January 2010.

The steepest penalty, 15 years, went to Wilfredo Castillo, director of the Psychiatric Hospital. The vice-director was sentenced to 14 years and the dietitian, to 12. As authors of the crime of abandonment of disabled and disadvantaged patients, the vice-directors of clinical surgery and nursing were sentenced to 10 years each. The head of psychiatry received a penalty of 7 years.

For embezzlement, sentences ranged between 6 and 10 years, and the accused were seven employees who were in positions subordinate to the hospital, as managers of the store, kitchen, dining room and bar, among others. Moreover, the Court issued a fine for the head of the center’s pharmacy, for “dereliction of duty to preserve the assets of economic entities.”

All those convicted may appeal to the People’s Supreme Court. The ruling also states that “outside the judicial process severe administrative sanctions were also imposed against other responsible parties.”

These, in brief, are the results of the trial held between January 17-22. A trial that was presented as bad theater by the official press, which tried to decorate with legal technicalities what everyone knows: the collapse of public health, a weak legal system, rampant corruption in all sectors of national life and media hypocrisy.

The newspaper Granma omitted the number of those involved and killed, but gave details on the number of witnesses examined by the Court and the specialties of the members of the commission created belatedly by the Ministry of Public Health to investigate the causes and conditions that led to “the deaths that occurred.”

Have the judges of the Second Criminal Chamber of the Havana Court seen the photos of the deceased that surreptitiously circulated in the city? The skins lacerated by blows, evidence of physical abuse? The faces of those who vainly tried to keep warm when the rigor of death reached them? Emaciated bodies, that received severe punishment because, being unconscious, they couldn’t perceive their abandonment and protest it?

Hunger lashed them with the same harshness as their nurses and doctors, who possibly were tired by such hard work and robbed of human sensibility by material need. Granma called this negligence “insufficient patient care.”

“The prosecution alleged that those involved knew that winter could produce an increase in deaths from respiratory diseases,” explained the journalist. However, “the pattern found in the clinical outcome” showed severe signs of malnutrition, anemia and vitamin deficiency.

A cold front did not cause this suffering. The 26 mental patients died as a result of low temperatures, but also from the lack of adequate nutrition, for months or years. In these physical conditions, death was a matter of time. The sharp drop in the thermometer was a catalyst, perhaps desired.

So the trial ended. Sentences were handed out, but many questions remain.

Couldn’t this sad ending have been avoided? Did no prior medical analysis reveal these diagnoses? What did the government officials and Communist Party members who worked at the center do? In all that time didn’t any historical leader pass through there? Wasn’t the Psychiatric Hospital a strategic objective of the revolution?

One last question: Where was José Ramón Balaguer, the Minister of Public Health at the time? Maybe he was eating, all snug and protected, and then went to sleep in a warm bed. Meanwhile, thirty people who had gone mad, who were human beings, died of hypothermia and malnutrition in a part of the system he managed.

Like other incompetent ministers, he was removed in late July 2010, but he continues his work in high government circles, as if nothing happened. No apologies, no regrets, no public acknowledgment of his error. Balaguer is part of that select group of untouchables, men loyal to the Castros, who are entitled to enjoy “the honey of power” until the end of their days.

Maybe that’s why the court did not get permission to investigate. Justice focused on the cooks, employees and directors of the hospital.

The curtain came down. Case closed. Within days, no one will remember the tragic events. Thanks to the official press, which chose to disguise the human misery of a “sector which is the pride and bulwark of Cuba and many countries around the world.”

Photo: People wait to enter the trial in the Peoples’ Court on October 10.