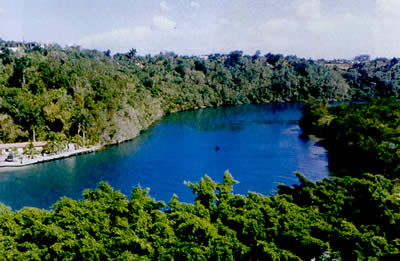 Today, July 6th, is the 34th anniversary of what is regarded as (only by a few certainly) as “The Massacre in Canimar River” because 14 years before the sinking of the “March 13th” tugboat there was an almost identical event in which the Cuban regime was left further unscathed than in the crime of 1994. In the same days as the exodus from Mariel three youths attempted to seize a tourism boat in the area near the Matanzas bay carrying 60-100 people.

While they attempted to escape they were persecuted and machine-gunned by the authorities and later drowned. The exact number of victims is still unknown although they were approximately 50 people of whom some where women and children. (“The precise number of victims remains a secret, but it is at least 56, including children of the ages 3, 9, 11, and 17 years old” according to the Cuba Archive). Only 10 people survived and 11 bodies were retrieved.

Its “historical” importance is to serve as a reminder that the sinking of the tug boat “March 13th” tugboat was not an isolated incident, but one of the most salient characteristics of the political system whose aim was to repress through all venues — including assassination — people who attempted to escape the island.

The other point is to better explain the sinking of the tugboat as a sort of general rehearsal: whomever made the decision to sink the tugboat (and given the transcendence of the decision the most logical answer is, Fidel Castro) had to remember the scarce international repercussions from the massacre that occurred 14 years earlier and reflect that, effectively, it would serve as an intimidating gesture in the domestic sphere without the price to pay in public relations being too costly.