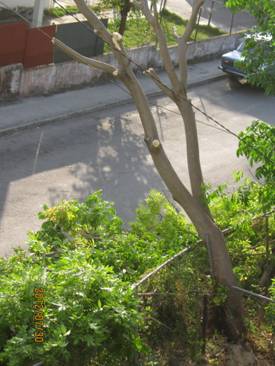 On the block where I live was, in another era, a haven of peace to walk along, protected by the shade offered by its trees, all, one by one, victims of some neighbors who were greatly annoyed by the dry leaves they shed, without caring anything about the cans and empty cartons, cigarette buts, that they themselves strewed across the sidewalks and flowerbeds.

A couple of days ago the last tree fell, a tree that gave us shade, although not on the sidewalk but next to it within the grounds of a kindergarten. It was attacked on several occasions by a neighbor who threw oil on it, with the clear intention of drying it up. The tree survived, because the sap continued to circulate through the trunk that was beyond the reach of this predator. But weakened in the extreme, finally it fell on the perimeter fence, damaging it and blocking the way, in its great leaning toward the pavement. The mastermind of this destruction looked for a way to get an Electric Company brigade to come and cut it down, since its fall affected the wires.

This tree could have been saved by tying it back and returning it to its position, but this would have been in a civilized and well organized country, where institutions exist who work to protect them, not in ours. This was simply a chopping down and leaving it in a dangerous position. Today, finally, a brigade with an electric saw came and cut it into pieces. The brigade came, sawed and retired, as always, taking the large pieces of the trunk but leaving lots of branches and leaves scattered on the sidewalk.

One tree less, in a country where the sun punishes all of us equally. Now nothing more can come to shelter us in its shadow.