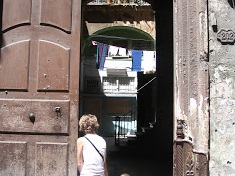 Elsa Velázquez Mata wanders between delusions and afflictions. She’s always seen carrying a portfolio where she saves several records of housing she never received, despite being dependent on welfare, letters sent to her from ministers, medical certificates that attest to the congenital heart condition of her youngest son, and a diary (little notebook) that holds her laments over 17 years.

Elsa, a 43-year-old agronomist, has suffered physical abuse, eviction, prison, and worst of all, the mockery of a government that says it defends the rights of women.

Elsa Velázquez lives with her son in the home of an aunt, in the Santa Maria del Rosario neighborhood in the Havana municipality of Cotorro. “Someone lives because of me, eats because of me, I have no record of identity and residence,” she says while showing an identity card made for her: a piece of white cardboard where her personal data appears in cursive, her photo and fingerprint in methylene blue.

Five years in prison “for burning her husband”

Her life took a sharp turn in 1997 when she was the victim of domestic violence on several occasions. She was sentenced to five years imprisonment for burning her former husband with hot water. But Mata Velázquez always denied the incident. She says her ex-husband, aided by his brother, a former police officer, carried out the attack on himself to have her charged so he could stay in the house.

This Cuban woman has been watched by the authorities for 17 years. In 2004, after serving five years in prison, and with her two-month-old son, the Director of the Convention Center in Havana, Abrahán Maciques, promised her that before the baby started eating she would have a completely legal apartment, Maciques headed in the Provincial Department of Housing and under the protection of the functionary Rafael Martinez, initiated her first housing file for priority cases, number 290 of 2004.

After a year of waiting without receiving the promised housing, the Popular Power in Havana opened two new files for Elsa, numbers 6000 and 6017 of 2005. Two years later, on September 15, 2007, the case was transferred to the Popular Power of Guanabacoa, and Elsa appears on the housing waiting list with case numbers 05272 and 1146. On December 23, 2009, the municipality of Cotorro took over the case and two other files were opened (061285 and 04568), the latter corresponding to a disabled home in the town of Santa Maria del Rosario. All these files were traded (sold), because according to Elsa, “in the civil registry she appeared with another identity.”

Weighed down by being shunted around so much, in January 2008 Elsa decided to take her child and occupy an abandoned post office, located in the town of Santa Maria del Rosario. Aware of the violation, she decided to send a letter to then postmaster of Cuba, Luis Enrique Blanco Prieto, so that this place would be legally handed over to her. On the 28th of that month she was evicted by force. She says that in her absence, the police broke the lock of the room with gunpowder and took the roof, the windows and a rice cooker donated by Social Security.

On May 24, 2010 Elsa response from Luis Enrique to assess the case. But it was too late, that post office had been taken over by a police chief named Daniel.

The houses she never had

February 13, 2010, was her last attempt to demand a “comfortable” home, as she had begged for in each of the files. She made this demand to Juan Contino, then President of the Popular Power in Havana. In reviewing the records of “social cases Liudmila Mejía and Orlando Nunez, the latter second in command of the Popular Power in the capital, found that Elsa Velázquez Mata appears as the owner of six apartments.

Today Elsa, among her delusions, demands “compensation” for the houses she never had. Maybe that’s why she keeps all the meticulous files on the homes, the dates of appointments with officials, letters, eight ration books, newspaper clippings, speeches by Fidel Castro and even the official donation of an abandoned post office.

Odelín Alfonso, born Havana, 1970. Graduated in 1989 in industrial electronics from the former Eduardo García Delgado Technology Center. In 2004 he joined the internal opposition as eastern region coordination for the Liberal Orthodox Party, and, in 2005, the independent press.