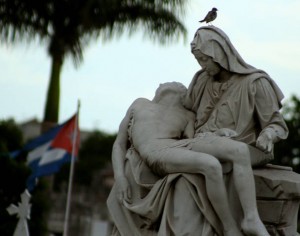 At the beginning of the Revolution, when he realized that his “Soviet brothers” would not launch a nuclear war against “Yankee imperialism,” and after blatantly collaborating in the anti-Castro plot that killed President JFK, Fidel Castro had his hands free to make the United States whatever he pleased according to the historical period.

Now that technically he is no longer among the living, we Cubans can finally confess to ourselves: in many ways, Fidel Castro was the equine caudillo not only of those who endured the barbaric boot of island socialism, but also of those who believed they had escaped the Stable-State when they crossed themselves before the Statue of Liberty or Miami’s Freedom Tower.

But in a totalitarian Revolution, like the recurring nightmares of childhood, no one ever quite escapes. And we have that awful Oedipus complex called Cuban-American culture to prove it.

To make matters worse, there is some kind of perverse plagiarism in the Capitol in Washington DC, compared with the exceptional trashiness of the original, there, a little south of Miami and the Keys and their historic horizon, in a Havana also, subtly, DC (Después [after] Castro). Meanwhile the obelisk of the American capital–where Cuban spies sojourn, generation after generation–now presents a rough reflection of the war monolith in the Plaza of the Revolution.

Those who most collaborated with continental Castroism, pretending exactly the opposite, may be precisely those irreconcilably anti-Castro, among whom we find, as is now obvious, the paranoid patria of Fidel Castro himself, who had more infiltrators and agents in “extremist” exile than in his sacrosanct Department of State Security.

Not to mention the American Academy, whose textbooks are written with the same Revolutionary rhetoric, a rhetoric that implies the right of Cubans to live without rights in order to preserve our “sovereignty” a short 90 miles from the USA. And with a Yankee naval base — the crude Guantanamo — standing against bellicosity!

I wonder why it hasn’t occurred to any “pro-democracy” Cuban to launch a media campaign or to lobby Congress to demilitarize this base as old as a landmine, which could well be returned immediately to the non-Castro Cuba of the rest of the world, the lost pariahs of our post-national diaspora, wandering natives, so at least we could go back to that bit of non-communist Cuba, creating there an exclusive civic-commercial enclave, Taiwan-style or like the Panama Canal Free Zone.

I wonder why we don’t ask ourselves what the Castro clan could do in the face of this Taiwaintánamo City which, without ceasing to be U.S. territory, would exemplify the concrete Cuba of a future as capitalist as it is democratic, without the anthropological defects of Castroism.

I suspect that at this point in a history without histology, we Cubans lack political imagination. Our exhausted chanting in the key of Socialism-sharp-major, conguita of a cool-Castrosim, was constitutionally forced into our bodies. Castro castrated us, to the point where we no longer find even his Cadaver-in-Chief very difficult, after that civil war that lead to State slaughter when the international community abandoned us.

It’s painful to say it, but the Cuban exile — and the more radical it is, the more prone to the ridiculous — was always easy to manipulate according to the criminal convenience of the ex-Commander-in-Chief, particularly with regards to the hieratic milestones of anti-Catroism, as well as the emigration stampedes within the Island and the extremely limited Embargo Act intended to “asphyxiate” the Havana government. A government which, over more than half a century of Democratic and Republican administrations in the White House, made a mockery of such “emphysema,” trafficking funds to international terrorism left and right. They arrived only through violence and only through violence will they go.

Of course, before the start of the lobbying for Taiwantánamo City, one would have to wonder at what point does Fidel Castro no longer serve as the good villain of the film before and after the Cold War, the sympathetic assassin of Hollywood and The New York Times. And yet, perhaps Special Agent 01-01-1959 not so secretly safeguarded the most intimate — and intimidating — interests of Washington DC .

The mistake of Fidel Castro, so distant from the Cuban people, and the fate of the United States of America, suddenly seem to be under only one sun: A despotic pluribus unum, novus ordo seclorum invisible but indivisible, with liberty and justice for none.