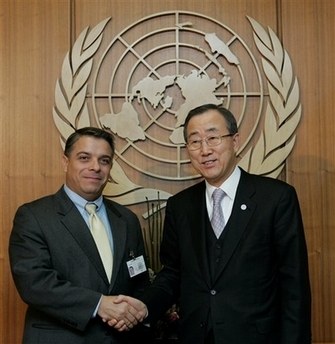 “A ghost is traveling around Europe: it is the ghost of Communism” said Karl Marx and Friedrich Engels in their famous Manifesto.

Over a century later, when he was Foreign Relations Minister and the one who best interpreted the thoughts of the Commander in Chief (Fidel Castro), a photo of Felipe Pérez Roque shaking hands with Mr. Ban Ki Mon, Secretary General of the United Nations (UN), appeared in the newspaper Juventud Rebelde, on February 28, 2008.

The snapshot was taken on the occasion of the signing, by Foreign Relations Minister Felipe Pérez Roque, of the two International Covenants on Human Rights (ICCPR and ICESCR) that came out of the UN in 1966 and started to be signed and ratified worldwide, going into effect in 1976, 10 years later.

The UN’s Universal Declaration of Human Rights of 1948, despite the overwhelming moral commitment that it entails, is only a recommendation, not a binding treaty for any government.

Four years after this event, there are several questions to be answered if we want to analyze it:

The problem is that, right now, we continue to face this widespread crisis that seems endless, just like the absence of deep and serious responses from the side of the government.

Outraged people are not only in Europe, in Wall Street or in Arab countries. A group of citizens from Cuban civil society is demanding the ratification of the UN Covenants signed on behalf of the Cuban people, precisely because we are… outraged.

Ghosts have always existed throughout history. Yesterday, Communism was Europe’s ghost. Today, in Cuba, a new ghost starts moving around, horrifying and frightening for some: the ghost of the Human Rights Covenants of the United Nations.