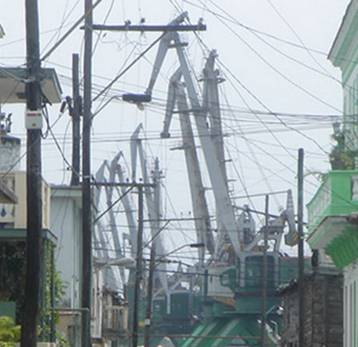 Today, Friday, we woke without electricity. Regular television viewers said yesterday’s late-night news program had reported that a large area of one town, Plaza, would be impacted by maintenance workfrom 8:00 AM until 5:00 PM. This has been going on for several weeks.

Since I had not heard about this, I called 18888, the magic phone number for reporting such instances. A weary voice came on, repeating over and over in monotone, “Outages due to repairs.”

Of course! Those impacted are us, the ordinary citizens, especially those who pay excessive sums of money in license fees and taxes for their nascent private businesses. No one is compensated. They stopped doing that here half a century ago.

In the very early hours of the morning a truck with a crane, a repair truck and ten men arrived atthe corner ofForty-firstStreet and Conill B in the Nuevo Vedado neighborhood.Eight of the men spent nearly the entire time sitting on the pavement while the other two were perched on the pole. Later it occurred to me that the two climbers themselves were sufficient; all the others were just there as cheerleaders.

Forty-first Street was closed to traffic from Avenue 24 to Avenue 26, with cables laid out all along it. The neighbors – some resigned, some indignant – contemplated the spectacle from their balconies.

The delay is such that we have still not determined if they are sculpting the pole or decorating it. Since we are such an artistic powerhouse, it is quite possible they are turning it into a work of art, given the time invested in repairing the thing. So, now, to whom does one submit a claim? Who is responsible for the resulting losses and nuisance? No one, of course. Just like the complaints made to the famous telephone number in question, all protests fall on deaf ears.

It is now a little past five in the afternoon (the promised hour of completion). Traffic and electrical service have now been restored. Perfect timing.

If this is efficiency and productivity, God himself should come and see!