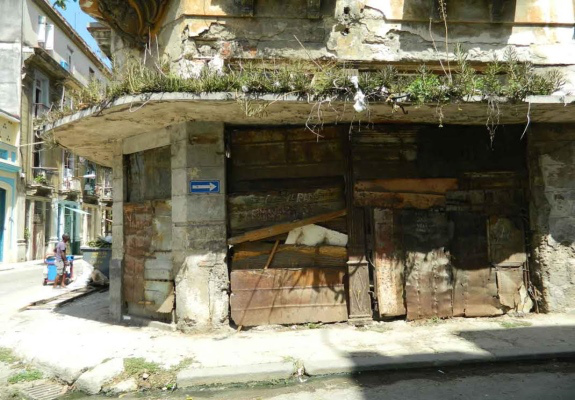 For the environmental project, “A Rose-Colored Planet,” children would be responsible for beautifying the green spaces of the capital. Dilapidated Havana requires much more than a community gardening project: sanitizing the city is the urgent business.

Cubanet, Gladys Linares, Havana, February 27 2015 — Now it turns out that children have the responsibility for creating green spaces for the enjoyment of the public, and ending more than fifty years of governmental neglect.

This is unheard of!

In the article, “They celebrate the work day in order to promote the beauty of gardens,” the newspaper Juventud Rebelde describes the environmental project, “A Rose-Colored Planet,” and an interest group composed of 500 children that would be responsible for beautifying the green spaces of the capital.

Will children be able to solve the problem created by the public services that go around collecting the large garbage and debris heaps that proliferate in the city, with 14-ton front-end loaders that destroy the sidewalks, curbs and gardens, and leave craters that become breeding grounds for mosquitos, rats, and other carriers of disease?

Any idiot knows that the complexity of this task requires much more than a community project, because the duty of maintaining green spaces in good condition — as well as of implementing public health and sanitation projects — falls to the public administration.

Will children be able to solve the shortage of wheeled bins needed to collect the 20-thousand cubic meters of waste that our city generates? This dearth of bins is often the result of mishandling by Comunales * workers (who are not held accountable for their actions), or acts of “social indiscipline” such as wheels being removed, junk being discarded in the bins, the bins being set on fire, etc. Such actions convert densely-populated neighborhoods such as Diez de Octubre, Centro Habana, Arroyo Naranjo and San Miguel del Padrón into sites for those large garbage heaps referenced above.

Will our children be able to require that the workers who are currently installing the water meters in Marianao not leave behind debris, trenches and water leaks upon completing these projects?

But it is not only Aguas de La Habana which leave behind their mark of shoddiness. The gas company does it, too, when they complete some road “repair” project. They claim that covering-up and fixing the sidewalks is the Comunales’* responsibility, and despite efforts often made by area residents, these projects are not finished adequately.

All this negligence on the part of the State has provoked an exacerbation of acts of “social indiscipline.”  In the absence of parks and recreational areas, the children play in the streets, annoying the neighbors. In the absence of containers, the public alleges (rightfully) that garbage cannot be kept inside the house, so they throw it in the street. Perhaps it is no coincidence that we hear so often of neighbors and relatives of friends dying of leptospirosis, as happened last week to a young man and his dog, who lived less than 100 meters from one of those garbage heaps.

“A Rose-Colored Planet” includes among its objectives the creation of gardens for the enjoyment of hospitalized children and residents of elder-care facilities, applying the methods employed in French gardening — a fine and noble task. Starting at early ages, this community project develops civic consciousness, which we so need today.

But much more than children’s projects is needed to return Havana to its green lushness.

Translated by Alicia Barraqué Ellison, and others

* Comunales is the state-run waste management company in Cuba. For other articles in Translating Cuba about related issues, click here.