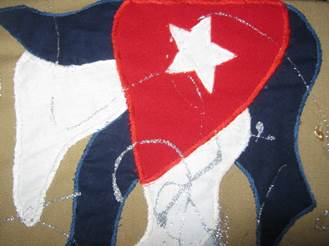 Fernando Damaso, 12 September 2016 — In light of the proliferation among Cubans of garments adorned with elements of the United States flag and, to a lesser degree, the flag of England, some “defenders” of the national identity and of patriotic symbols have proposed making the Cuban flag more visible, as “many Cuban flags.”

Being that the natives of this Island tend to outdo ourselves and we forget that there is a happy medium, some sportswear items have appeared (awfully designed for the Río de Janeiro Olympics)–shirts, shorts, caps, purses, tote bags, and even aprons–bearing elements of the national standard or, simply, reproducing it without any creativity.

Now, following the beat of these pioneers, other “purists” have raised their voices, demanding a prohibition against the use of the flag on items of clothing, because it is unnecessary to import “bad customs” from other countries. In the first place, to categorize the habits of others as “bad” or “good” seems a bit petulant: they are customs and should be respected, even if not imitated.

Besides, why this late defense of patriotic symbols, when in fact, officially speaking, they have been quite disrespected? Examples abound: utilizing the flag during any political activity, no matter how trivial; leaving it suspended eternally in closed-off areas, even exposed to the elements; printing it on paper and, later, allowing it to be strewn on the floor like so much trash, trampled on by passers-by; hanging it up in state-run establishments as a curtain on doorways and windows to block the sun; printing images of historic and not so historic figures on it; and, as if all this weren’t enough, having the Historic Leader write his signature on it with a felt-tip pen during a public act on the staircase of the University of Havana.

Let us not even mention the national coat of arms, for it has been obviated and forgotten, having not been present, as was customary before 1959, in government buildings, but rather, in observance of a blatant personality cult, substituted by photos of living personages.

All of this racket is due to some “dogmatics” who, from an “idiotological” point of view, want to confront a foreign custom that has been taken up in our country.

I think there are real problems that are more important to confront, unless this is one more entertainment designed to lull Cubans with cheap patriotism.