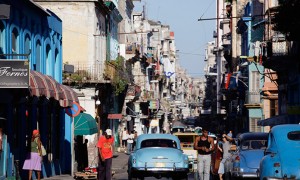 LA HAVANA, Cuba, September, www.cubanet.org — A new program recently started on television at the end of the newscast at 8 pm. It is named “Cuba says” and is listed as an investigative journalism program. There have been four broadcasts, Tuesdays and Fridays, with the objective of “criticizing” bad deeds.

On two of the broadcasts they addressed problems relating to construction, and the others talked about health care and transport. But even if they approach social and economic problems, which show the existing apathy and corruption, in short, the blame always likes with the people, for their lack of discipline; or the United States for the “blockade”; or with some other entity other than the regime with its inefficiencies.

The functionaries who have to respond to the journalists, look insecure. Evidently they are under the pressure of those who at any cost don’t want to leave the viewers with the impression that the problems are the fault of the government. One example: the Director of Transportation explained that the problem of lack of buses was centered on the broken equipment and the scarcity of spare parts, while the journalist Thalía González pressed him to say there were also organizational problems.

In the end, the public saw the problems they already know reflected on the screen, but without knowing how or when they would be solved.

The last program dealt with housing construction. They reported that up to 2019, they need to build 29,400 units in Santiago de Cuba, since there are 73 slum neighborhoods and more than 10,500 houses in difficult conditions, as well as unhealthy settlements. However, despite the resources they say have been allocated, after Hurricane Sandy (October 2012), they’ve only built 1,542 housing units, and by the end of the year expect to have completed 1,900. At this rate, they won’t build even half of those planned.

On other occasions we have already heard criticisms of this type, and answers that then fade into nothingness. However, we have to recognize that the regime has seen the need to admit that the country is in a sorry state, from all points of view.

Recently, we’ve sensed a tendency to look for help in the self-employed, trying to minimize al he problems brought on the country by centralization and the unified command. However, society, which is eager to solve its problems of economic stagnation, has taken these small apertures very seriously, and currently is swelling the numbers of different types of businesses, so that the regime is grasping at straws, reversing more than a few of their permissions.

In Pinar del Rio they withdrew the right of private sale of clothes, because this market has been strong competition for the State, whose prices are higher and whose customer service is greatly inferior, along with the well-known scams where the customer is the victim.

They could show hundreds of TV programs with critiques and suggestions from the people, but the reality is that none of the issues that they raise are going to be solved until there is an end to the main problem, which generates all the other problems, which is the same regime, which has plunged the country into an acute economic, political and social problem.