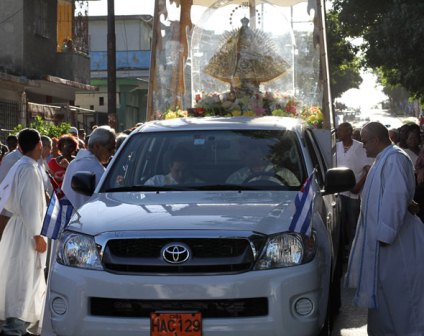 I hope that when we are alone, when we exhaust all the possible, when the impossible becomes the only option for salvation, Christ appears. The Catholic Church is not going to take on the fight for the common people. It prefers to keep up appearances. Beggars annoy it, the number of crazies who come to the churches asking for help.

I hope that when we are alone, when we exhaust all the possible, when the impossible becomes the only option for salvation, Christ appears. The Catholic Church is not going to take on the fight for the common people. It prefers to keep up appearances. Beggars annoy it, the number of crazies who come to the churches asking for help.

It does not want to save the sinners, because it feels better at the sumptuous tables, among those who have not suffered temptations. It doesn’t matter, I learned to read in the Carmelite and barefoot key that was necessary to humble myself before what the priests say, to be obedient, but to continue believing in the living God.

I like it because all the elements of this situation tend to the second coming — the parousia — as the only option for salvation. There will be an epiphany in Cuba, nothing else is left. To cap off an exceptionally Catholic week on national television, I have heard it said from the pulpit of San Juan de Letrán that people who sheltered in the Church to present their demands to the Vicar of Rome and, in turn, who dared to discuss them with the government, were being paid, were employed. Being paid by whom? Employees of whom? I wanted to ask the young monk.

One must not interrupt a sermon, however, so I concentrated on the sound of the rain in the desert. The opposition in Cuba, before being a political party, aspires to have the Universal Declaration of Human Rights recognized and respected. This is not about politics, it is about mental health.

I had to think of John Paul II. How I instantly noticed the difference. The expectation of the first visit of a Pope to an oppressed Cuba was of freedom. Juan Paul II himself chose to be called the Messenger of Truth and Hope. He was Polish, he had suffered two totalitarianism, he knew about the anti-human and anti-Christian phenomenon of these two aspects of Marxism: the Soviet and the German. He knew the problem was not political, that to speak of the value of a human person was sufficient to be a dissident.

But this Pope is German and I have heard that in his youth he belonged to the Hitler Youth, it’s evident in his character. A character, in the best of cases, of submission. Before becoming Pope he was the Torquemada of post-modern times, they can no longer burn anyone but they accuse them and close off dialog before the social realities of these times. I started to think about the Gospel reading of the day, that of John, my favorite.

Jesus spoke with Nicodemus, that he would be raised like the serpent of Moses. My God, I have heard today that God so loved the world that he gave his Son, it makes me think that if I had been standing at the side of an angel I would not have wanted to look, because God has placed in the faith of Christ all we need to access this transfiguration.

Nevertheless, it stops before our freedom, hopes that we put our humble pebbles in the cornerstone of the active faith that he has put in the world. That let me forget my disgust at the sermon and even to forgive the priest, thinking that he has left the whole world to devote himself to prayer.

But I also think that if the Church does shies away from the collision it will not have the chance to win the battle of faith against the anti-Christian beast that is the Cuban Revolution.