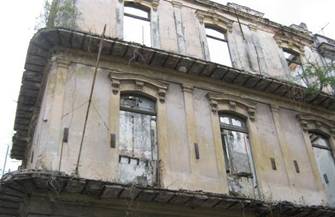 Every year around this time, Cuban authorities put together a report on the damage caused by the “blockade” (in reality an embargo), which this year it will present to the United Nations in October. To this end, state agencies and institutions report losses they have suffered during a period from 2013 to 2014, using statistics to emphasize the impact.

In addition to its actual impacts, the blockade is also blamed for all mistakes, weaknesses, irresponsibility, lack of productivity, delays and any other problems. It has become a kind of River Jordan, a place to wash away all one’s sins. These reports are like tropical hurricanes. Every time these storms hit the island, they are blamed for any damages suffered, from a sugar harvest which has already failed to a building which has collapsed in advance of the atmospheric event.

If these reports are to be believed, the chaotic state of agricultural and livestock production, the widespread lack of productivity, the technological backwardness of what few industries we have, the housing shortage, the disrepair of streets and sidewalks in our towns and cities, the poor quality of education and health care, the lack of internet access, low wages, unsanitary living conditions and many other ills that beset us are due principally to the “blockade.”

This blockade is more than fifty years old. What is striking is that only in the last twenty or so years that it has been denounced at the United Nations. Back when the former Soviet Union was subsidizing the Cuban government, it did not seem to be a problem. It was even the subject of jokes. It only became a problem once the subsidies ended and we actually had to work.

For years efforts have been made to convince us that we are both politically and economically independent. Why then this debilitating interest in wanting to buy everything from the United States? Why not purchase what we need in the Americas through Mexico, Argentina or Brazil? Or in Europe through France, Italy and Russia. Or in Asia through Japan, South Korea or China?

In truth the problem is not so much one of distance or of increased costs but, as you might surmise, a lack of financial resources. In order to be able to make purchases anywhere in the world, hard currency is required. And hard currency can only be obtained through economic production and export. Similarly, in order to obtain credit, you have to fulfill certain requirements and then spend it as agreed. The era of living off others is over. As the refrain of a popular song goes, “Work that yucca, Taino!”

Similarly, the problem of the blockade will not be resolved through the United Nations or a favorable vote by a majority of its member countries, for whom it is a political ploy to stay on the good side of the Cuban government. The solution will only come about when the governments of Cuba and United States decide to reestablish normal diplomatic relations. For this to happen, they must sit down and talk, and to be willing to both give and take. Intransigence won’t work here. Anything else is simply propaganda and a waste of time.