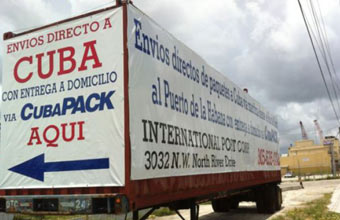 I avert my gaze with disgust from the broadsheet of troubling portents that the newspaper Granma has become. Recently, the newspaper published new customs regulations the Cuban government has imposed on its own people. In essence, they amount to a significant reduction — now significantly less than 120 kg — in the weight of non-commercial goods allowed to be brought into the country by the average citizen.

There is also a significant reduction in the value of merchandise allowed to be brought in, from 1,500 pesos beforehand to 1,000 pesos now. Everything determined to be above this limit is to be confiscated. Additionally, there is an ominous decision by the Ministry of Finance and Prices to raise the duty on merchandise received by mail from 10 to 20 CUC — some 500 pesos, the equivalent of a month’s salary — on each kilogram above the initial 1,500 grams.

Like a soothsayer looking into his crystal ball, I can clearly see the inevitable consequences of these measures. Without much effort, I can spot the corrupt customs officials in every Cuban airport rubbing their hands and growing increasingly rich, charging the helpless traveller ever juicier extortion fees, enriching themselves with impunity with millions stolen under the impassive gaze of all the political and government authorities gathered around the feast.

They do this under the very noses of the Interior Ministry officials responsible for “catching them.” This is the same Interior Ministry that is so well-informed and ready to suppress ipso facto any activity of the opposition, however small it might be, but that suddenly becomes “blind and disoriented” in the face of these scandalous, illegal transfers of money.

Nevertheless, I do not foresee in the magic ball the flow of “mules” who supply the black market being halted any time soon. They have “greased” too well those same corrupt officials through bribery. Nor do I see these restrictions leading the Cuban people to buy more shoddy, third-rate goods at scam prices in the hard currency stores; people took note of the pillage happening there a long time ago.

In the depths of my imaginary ball I see very clearly indeed people’s increasing disgust with a government that grows ever more out of touch with them, mired in a delusional fantasy and crafting the kind of measures that only serve to make life more miserable with each passing day.

The Cuban government has demonstrated that it knows no limits when it comes to besmirching us. It is sickening to hear the arguments used to justify these despicable measures. Confiscating a mobile phone in an effort to keep it off the flourishing black market is like grabbing the wrong end of the stick, as is trying to grab certain products brought in by certain passengers.

If someone imports dozens of televisions and computers while someone else brings in dozens of printers or desktop PCs and it is done through customs and with the blessing of officials, it means there were good “rea$on$” to permit it. This does not justify adopting a sweeping policy to deal with a few individuals but which ends up affecting us all.

Furthermore, even if an enthusiasm for acquiring wealth by those importing these goods is demonstrable, it is not something that can be demonstrated at the airport, nor is it the responsibility of the General Customs Service to do so. For that there is a body of regulations and inspectors, whose very job is to see to it that legislation is enforced on the ground. But to accuse all of us of the same thing and to make us pay in the same way is a huge stretch.

Without being naive, it is certainly not natural or ethical for someone who does not know my needs or the size of my family to presume that whatever I bring in beyond what he happens to deem appropriate is of a “commercial character.”

We should never forget, however, that the enduring maxim of the authorities of this country is to ignore the principle of the presumption of innocence. Here you are considered guilty until you can prove otherwise.

Meanwhile, we remain the only country where the government insists on fining its own citizens — no matter how much they try to sugarcoat it, this is what it amounts to — at the customs house door for the “crime” of simply trying to improve their lives.