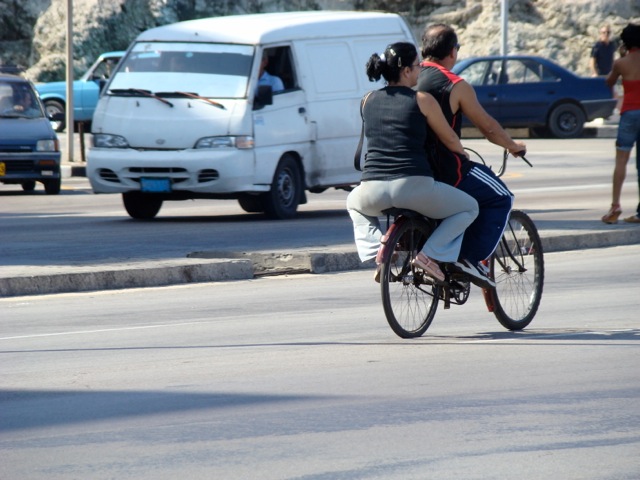 Faced with the debacle of urban transport, the Government will implement an emergency plan that includes the use of bicycles as an alternative for personal mobility, a measure that dusts off the bloody years of the “Special Period.”

In the Council of Ministers meeting held on Saturday June 29 in the MINFAR (Ministry of the Armed Forces), Vice President Marino Murillo Jorge analyzed the deterioration of the technical condition of the equipment and described the reordering of urban transport in the Havana as “unstable, insufficient and poor quality,” while recognizing “fare evasion on the part of the passengers, and stealing — with impunity — part of the fares collected by the transport workers.”

The Raul’s regime economic czar assessed as “poor” the efforts of the bus companies, including the boats that cross Havana Bay and the limited railroad employment, noting that the main inputs for this work — fuel and spare parts pp are acquired on the black market and the state system itself serves as its main supplier.

The members of the Council of Ministers, along with its president, proposed to redesign incentive systems with bonuses, tax exemptions and even subsidies to avoid price increases in transportation.

The meeting took place less than fifteen feet from a parking lot car crowded with the cars of the latest generation, intended for use by members of the presidential cabinet of Raul Castro.

Look at the street

In the capital, the vehicles are not in such great shape, modern Chinese-made Yutong buses, imported during the years 2005 and 2006, and parts of their bodies exhibit scorched by the rust while their exhaust systems give off black smoke from poor combustion.

The private vehicles used for passenger transport have been in use for more than thirty years. Many have been re-powered to use diesel fuel in order to travel more kilometers per liter, and in the case of the “almendrones” (cars from the first half of the twentieth century), most of their bodies have lost their lines as a result of adjustments to increase the number of seats.

The buses on the routes “P”, which provide better service in the state-owned “Metrobus,”can be up to 40 minutes late at the stops, while for others such as the routes 8 and 34 the delay can exceed an hour.

Requesting anonymity, a former official of the Ministry of Transport claims that the Government acquired more than 900 buses in the markets of China and Ukraine, whose wholesale prices were negotiated for the trifling amount of $30,000 each, despite their cost on the world market being about $100,000.

The Cuban side began defaulting on payments and the supply of spare parts was cut off by creditors. “Thus began the urban transport problems,” said the former official.

An example is that at interprovincial transport base Augusto Cesar Sandino, located at 20 de Mayo and Patria streets in the Havana municipality of Cerro, vehicles began to be idled for petty faults, such as oil filter exchange.

Soon the process of “cannibalism” began (extracting parts or pieces to repair other equipment) which ended up severely spoiling more than 70% of the fleet without it having fulfilled its useful life. “The paradox,” the source added, “is that Cuba has not yet paid for those buses.”

Glimpse into the past

Buenaventura Martinez is 86 years old and lives in Cerro municipality and was one of the drivers who worked for the Allied Bus Cooperative (COA) before it was nationalized.

He treasures a package of a yellowish papers with data from the company, which came to pay annually more than 20 million pesos to its approximately 12,000 employees.

He says the company was perfectly organized. Its leadership team created workshops for body and engine repair, and the transport sector contributions were destined solely to the Ministry of Public Works for the improvement of roads, as these ensured the maintenance of equipment.

In the 50s, the company renewed its fleet with the acquisition of more than 600 buses General Motors brand. According to experts, this generation of buses was the most modern and efficient that American industry had built. 600 bus in front of the 900 acquired more recently acquired, and Havana by then had a population of about 800 000 inhabitants, less than a third of today.

For a prosperous and sustainable bike-socialism

For Felix Chamizo, 57, an industrial electrician, who put down his pliers and screwdrivers to get behind a counter and sell churros on his own, the collapse of public transport and the proposed use bicycles as an alternative, means “the second part of the Special Period horror film will start shooting soon.”

He says that in 1992 they sold him a Chinese bicycle at his workplace and since then he’s used it to get around the city. However, it seems a mockery to him to make an aging population ride bikes again; 60% of Cubans are over 40.

Felix avoids the buses and rides his bike only now and again, as he’s already showing signs of prostrate inflammation. He suggests it’s necessary to eat well to have the energy required to pedal, which is a problem in Cuba given the scarcities and high prices of food.

And when informed that, according to studies by British scientists, the food deficit and excessive exercise Cuban population suffered during the bloody years of the “special period” decreased the risk of cardiovascular disease and overall health benefited population, Felix replied, “These scientists are sons of p …”.