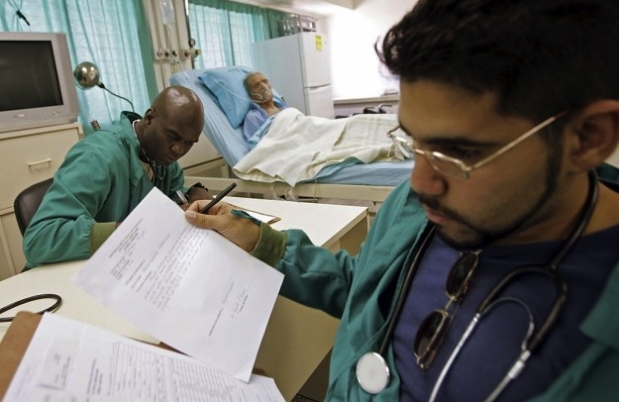 Demands by doctors to receive remuneration for hospital shifts were not accepted by the Government when it was developing the draft Guidelines for the Economic and Social Policy of the Party.

The response the doctors received from the authorities was in the nature of an order and command that the healthcare union has not dared to question: “Assessing these criteria, it is determined that hospital shifts are an activity inseparable from the exercise of medical practice and an essential principle in the training of all health professionals, for which there should not be  an additional payment. ”

According to the Government leadership, “The conditions for applying a general increase in wages still do not exist.”

However, after the refusal, the Government decided to authorize a controversial payment for night work for doctors and dentists, and to extend it to nurses and other workers in the system.

Let them eat cake. Thus, the government has applied to some doctors a new provision authorizing the payment of two Cuban pesos (8 cents U.S.) per hour for night shifts.

In many cases the response is resignation before the fear of reprisals for publicly questioning a government decision, or the impossibility of Cuban workers going on strike to force the government to give way before their just demands.

In others, and although no one is willing to come out publicly, the decision is considered a mockery and a hypocrisy on the part of the government, especially considering the high salaries and pensions paid to military personnel. Many of those wages far exceed what any healthcare professional receives, even without considering the “gratuities” — the other tangible benefits — given to everyone in uniform, and especially to those of higher rank.

“‘There’s no money to augment the salaries,’ is a hypocritical statement. How can there not be the conditions to increase the salaries of doctors for hospital shift duty, if every member of the armed forces (FAR) and the Ministry of the Interior (MININT) earns more than we do?” complained one of the doctors who was asked for an opinion and who requested anonymity.

“You can see any of those nobodies of the Armed Forces riding around all day in the new Chinese cars they give them. It seems that the air conditioning and the tinted windows make them forget that what Cuban has is an excess of heat and a lack of public transport.  I know colleagues of mine — surgeons — who don’t even have their own apartment. They have to live with their in-laws. To get to work, they use the old tactic of putting their white coats over their arms and standing at the stoplights so someone will give them a ride to the hospital. Nevertheless, any child of the Government leaders, without earning it in any way or having any kind of training, travels in a modern car paid for with the people’s money.”

“In Cuba doctors are highly appreciated by the people. It’s paradoxical, but it is precisely the people, the great majority of whom have nothing, who sometimes take the little they have to give it to the doctors at the hospitals or the clinics where family doctors practice. One patient brings a banana, another some sweet, or a soft drink or a packet of coffee. My clinic sometimes looks like a farmers market,” says Carlos, a doctor who claims to be a revolutionary but is one hundred percent in agreement with his colleagues’ complaints about the amount of money paid for hospital shifts, which is barely a pittance.

On the other hand, Paulino, an ophthalmologist who served on a foreign mission with his wife, in a country where they doctors are allowed to receive donations for patients, isn’t very interested in the issue of payment for hospital shifts, at least for now.

After serving more than five years on the foreign mission, his wife was given the opportunity to buy an apartment, and the government gave him permission to buy a car. He bought a Hyundai. That mission opened two doors that remain closed even for many doctors: a roof and transportation. In that sense healthcare personnel believe there are two castes of doctors in Cuba: those serving on foreign missions (that is, traveling to get money), and those who do not travel.

And following simple logic, many wonder how it is possible that you can not compensate physicians for working the hospital shifts, when it is precisely the services of Cuban doctors to other countries, along with other exports of human capital trained on the island, that bring into the country the Government’s primary source of foreign exchange*.

*Translator’s note: Cuban doctors and other personnel working on “missions” earn considerably more than doctors working in the country, but are only paid a tiny portion of what foreign governments, such as that of Venezuela, pay the Cuban government for their services; the national treasury pockets the remainder.