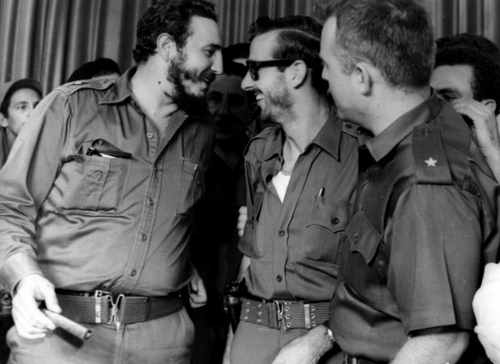 Death displays no stars on his epaulets, nor in civilian clothes (as they placed him in a box with a single family wreath). Death is a gradation of colors, from the intimidating olive green of the uniform to the cadaverous yellow of skin about to be cremated. Death is, also, the silence of the official newspapers and the national television news. Death is the absolute helplessness of Chapel J of a famous Cuban funeral home, where the body of commander Eloy Gutierrez Menoyo lies, while outside the sea roars like a cyclone through all the streets of El Vedado, crossing the patrols extorting the prostitutes, and the United States Interests Section Office is cut in the wee hours like a futuristic lizard.

The men who led the Revolution of January 1, 1959 can be counted on the fingers. Very soon they will be counted only with the word. Say what they will, the post-guerrilla court physicians, the Utopia of founding a Club of 120 Years proved to be just another fallacy of the socialist emulation. They also die, comrades: no one was immortal. After more than half a century of the so-called “historic generation” in power, this is all that will remain (before my desolate eyes at the wake): fewer than a dozen mourners, zero curious, the press in passing for the photo op, not even police or state security personnel, an unlikely emptiness of plastic chairs and functionaries in threadbare suits. Nobody has died or perhaps we are the dead, the effects of pedestrian apathy and the disintegrated forgetfulness of our nation. Like in a photo of the broken family of the troubadour Carlos Varela: it doesn’t help…

It’s a full moon in Havana, a transparent night that makes us weightless. The Revolution has turned into a volatile bubble, gas that adopts the form of the repression that contains it. The cypresses here no longer pretend to believe in God. There must be cypresses in Cuba to prop us the sky. At this hour there should exist at least a warm and rather bitter sip of God.

I remember my readings of Eloy Gutierrez Menoyo, including literary readings. I remember speaking with a crystal clarity and his lanky body in countless class documentaries that circulate computer to computer, although no one in Cuba today sees them, they’re boring, ugly, criminal. The new generations don’t believe in the prestige of death, so they have abandoned this gentleman to his fate. I remember him accused of being a Castro supporter (and in an epistemological sense he was right up to his last breath) by the undercover Castro agents. I remember trying to erase all the rancor from early on, despite the violence that in person altered him. I remember him tired of going up against death, provoking it to make life less miserable. One has the impression that in epic families such as the Gutierrez Menoyos, in that era of wholesale dictatorships (that one?), in whatever part of the world he would have sought vengeance against the Presidential Palace.

The testament of this excommunicated commander is a startling allegation. He dictated it to his daughter, Patricia Gutierrez Menoyo a couple of months ago. Both knew. This is a prescient text, bitter and hopeful. She, who reproduces her father’s features with a candor that makes you want to cry, sent it to the press as soon as she knew the inevitable had occurred. There, recently fallen from the airport after an aerial tour of the Island from Puerto Rico, she gave me a sheet that still smells of exile, of life, of liberty.

The commander Eloy Gutierrez Menoyo gives us, in his farewell, a lesson in style. It feels opaque and so seeks maximum transparency, the spontaneous metaphor in the bitter heart of the people. Being a man of submachine guns (nothing was more popular in Cuba than the language of submachine guns, which in the comics and literature of the seventies sounded symphonically rat-a-tat-tat-tat!), this Spanish Cubanism clings to a last butterfly that will alight in the shadow: thin, quiet, frail, full of joy, converging with the poetry of the New Trova that no one hears in this country any more.

Today they will cremate him, all the protagonists of our political 20th century, so his remains will not later be vandalized when, after the Great Death, the alarm sounds the democratizing ring-ring of the Transition. For now, rest in peace in this city that without wanting to he helped to ruralize, civilian commander of a barbarian in chief.