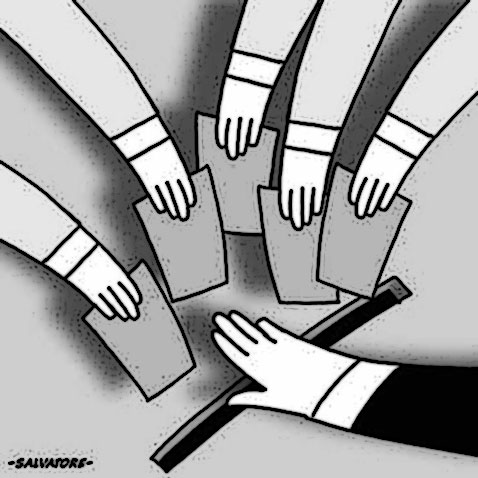 Some 6.97 percent of Cubans expressed their views about the Party Guidelines, but in the legal process of implementing them, it is not expected that the assembly will consult the people through a referendum.

In the midst of a crisis and the collapse of the economic system, Cuban communists decided to undertake reforms to “guarantee the continuation and irreversibility of socialism.” In the debates the term “human rights” was missing. Is is that Cubans are not interested in living in freedom?

In reality, they couldn’t include the islanders in these reforms, issues like freedom of association, the right to leave or enter Cuba, or the economic initiative on equal terms with the State. The Party says what will be reformed and how. It also sends their decisions to the National Assembly to be transformed into law.

In a report released for sale on the island in the second week of May, the Cuban Communist Party presented the results of the debates with regards to the 219 proposed political, economic and social guidelines, which were later expanded to 313, to be discussed “by all the people.”

The 1,000 delegates to the Communist Congress, who represent approximately 0.009% of the population, approved the reforms. However, their principle leaders are also those with the highest positions in the government and the state and also occupy seats in parliament. There is no doubt that their decisions have the force of law. A tremendous demonstration of unity and concentration of power.

The Communist Party is the only party recognized by the system. It does not submit itself to elections, but constitutionally it is recognized as the leading force of the state. With its 800,000 members, which represents 7.14% of Cubans, they have more decision-making power than the National Assembly, the organ that represents and expresses the will of 11.2 million inhabitants.

According to data provided in its, the Cuban Communist Party has consulted more than 8 million Cubans, approximately 79.6% of the total population of the island. Some 33.9% of the participants raised their hands, gave their names and surnames, to participate in the discussions in “meetings of their base organizations, workplaces, or schools and communities.”

With the first parliamentary session of this year, the third phase of the reform process will continue, “the institutionalization.” In a strict and practical sense, it will be institutionalized without first legally implementing the approved guidelines, or the National Assembly conducting a referendum.

The question is if parliament considers it necessary to conduct a referendum, after the Communist Party’s “popular consultation.” So far there has been no statement of their intention. Everything seems to indicate the answer is no.